The Least of My Scars – Book Review 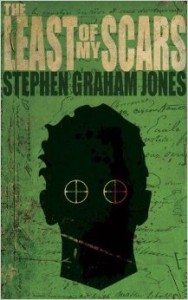 The Least of My Scars

Meet William Colton Hughes, serial killer. Holed up in a connected set of apartments, he’s got it made. Regularly supplied with all his necessities, he doesn’t even need to set foot outside. All that’s required of him in return is to answer the door and kill whoever comes knocking.

Aside from Hughes, there’s a mysterious woman with an agenda of her own, the occasional delivery people, a collection of corpses placed around his home (which he converses with, when the mood strikes), and a few others. Hughes himself is the focal point throughout the novel, though, and nearly all of it takes place in one apartment. All things considered, Stephen Graham Jones does a masterful job of maintaining both the momentum of the plot and attention of the reader.

Just don’t go into this expecting a character with the suave charm of Dexter or the erudite, sardonic wit of Hannibal Lecter. This is not your typical safe and sanitized, cat and mouse serial killer story. No, this is a one-way ticket to the inner workings of a murderous sociopath with no redeeming qualities, viewed exclusively through his perspective. Hughes is a monster, an abomination, right to the bloody core. Through tightly woven first-person narrative, the reader is forced to live vicariously through Hughes’ terrifying idiosyncrasies, forced to peer into Hughes’ own personal abyss.

There is some small shred of levity to be found here, but even that leads back into the abyssal depths of Hughes’ inhumanity. A pitch-black humor runs through the novel’s veins, to the point where any sane and sensible reader may be drawn to question the direction of their own moral compass. An apt frame of reference is Rémy Belvaux’s controversial film Man Bites Dog, which toys with the viewer’s perception and sense of culpability in a similar, though more obvious fashion. The Least of My Scars is arguably far more disturbing. It’s the kind of book that makes you want to have a shower after reading, to scrub all the filth off.

The prose here is exceptional. It’s meandering and claustrophobic, depicting in meticulous detail Hughes’ gradual descent into a state of frenzied paranoia. Whether he’s compulsively tapping objects, casually eviscerating people, or engaging in deplorable sexual acts, there are no frilly metaphors here to create layers of distance between reader and text. With consummate skill, Jones weaves together threads of plot in perfect tandem with the threads of Hughes’ mind tearing apart. Things start out slowly and escalate to a shocking and tragic conclusion.

It’s categorized as dark crime fiction, which may technically be the case. Whatever the label, with The Least of My Scars, Stephen Graham Jones cuts through the flesh of the surface and reaches straight into the pulsing heart of horror. If you can handle it (and yes, this is an open challenge), it comes highly recommended.