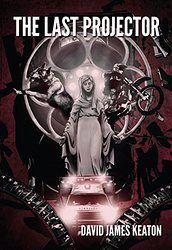 The Last Projector is a hysterical and hypnotic slipstream of anachronism and anarchy. David James Keaton’s novel reads like a stream-of-consciousness scroll that bounces through time from the 1970s to the present, or even the future, though most of the story seems to be seated in some version of the American ‘80s. The characters are wild and the plot is fascinating, if at points it becomes nearly indecipherable, and the prose is razor sharp and laugh-out-loud funny.

Billy and Bully are two more of the colorful cast of characters. Their relationship is founded on stories of questionable veracity, discussions of movies of questionable reality and a grudge against law enforcement of questionable sanity. The characters make a deep study of neck bombs in film and the films of John Carpenter. They discuss the merits of the film work of Rowdy Roddy Piper. Billy sings to Bully his charmingly obscene theme song for his dog Shaft and makes insightful comments on Shaft In Africa. The then there’s the rap tribute to John Carpenter’s The Thing, “The Rap’s The Thing,” itself worth the price of admission.

This isn’t a novel for everybody, as it ranges from absurd to vague, brilliant to bizarre. Along the way, though, it never fails to be less than fascinating and Keaton’s command of his prose is honestly beautiful. It’s a book that demands that the reader work for every page, scene and chapter, to exert intellectual effort to understand every twist and revelation, and it is effort that is rewarded with a reading experience quite unlike any other. The Last Projector is a book that is tough to put down, and not just because the reader wants to find out what happens next, but because the reader will also want to try and find out what just happened.