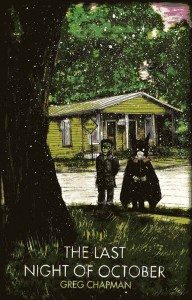 The Last Night of October

It’s no secret I’m a fan of what Greg Chapman is doing here in Australia. Although his written works are still in an early developmental stage, he has proved himself quite the renaissance man by tackling the art world with pencil and brush stroke alike … an endeavour that recently peaked with himself, Lisa Morton and Rocky Wood taking out top honours for superior achievement in a graphic-novel at this year’s Bram Stoker Awards. More than his list of accomplishments, however, is an individual who genuinely cares about his chosen fields. Earlier this year, Bad Moon Books saw fit to acquire his Halloween novella The Last Night of October. Featuring illustrations by the author himself, this is the sort of quick, deep and biting novella we’ve come to expect from Greg.

Confined to a wheelchair, Gerald Forsyth is ill of health and in the twilight of his life. He has many concerns … but chief among them is Halloween night. What he fears the most is not the exuberance of the annual holiday from a crotchety old man’s point of view. No, Gerald’s phobia is rooted in supernatural dread – for Halloween is the one evening of the year when a very special trick-or-treater comes knocking at his door  … a boy from his childhood past who wants something from Gerald; perhaps atonement for past transgressions, perhaps his very soul. When a relief nurse of Gerald’s accidently lets the boy inside, the two of them hide within the house. And it’s here that Gerald must recount his story, not only to be relieved of the burden of his guilt but of the very tale itself.

The premise is a simple one – reminiscent perhaps of Greg’s earlier novella The Noctuary. In that particular story, similar motifs were on display: childhood secrets, sins of the past, and present day retribution. Here, however, they have been infused with the glamour and cavalcade feel of Halloween. In regards to this, Greg’s descriptions have already earned approval from American audiences (it’s common knowledge that Halloween is not celebrated on Australian shores). The carnival feel is present and so is the nostalgia inherent in a young boy’s life – that time of adolescence when ones imagination is never riper and monsters take centre stage with love. As Gerald recounts his tale, a different sort of monster eventually takes centre stage, giving the author a chance to add even greater depth by treading the path of life’s choices and their consequences.

However, this is not a book without some minute editing faults, and a reader may feel themselves taken aback when a phrase or word is sometimes repeated five or six times within a page or paragraph. An example of a sentence that could be easily adjusted:

His chest rattled and Gerald felt blockage within his chest.

Though somewhat of a pet-peeve, I’ve always found repeated words to be a hindrance to coherent flow, giving the reader a self-conscious awareness they are actually reading a book. There is also a generous heaping of adverbs on display … although the jury is still out with regards to their legitimacy overall in popular fiction.

Small mishaps aside, this genuinely is a delightful book – one for all ages. Rich in a metaphorical writing style with an aside of aching nostalgia, The Last Night of October is Greg Chapman right at home and in his element.