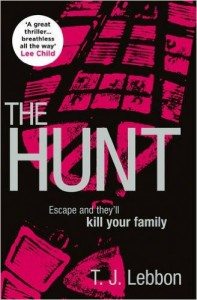 Tim Lebbon’s The Hunt is a new direction for the veteran writer. He forgoes his usual subject matter (horror of the more fantastic variety) for a grounded, reality-based thriller. While there are elements of horror in the novel, they take a back seat to situational and character suspense. The basic plot is one that has been seen in genre fiction throughout the years, focusing on humans hunting other humans. Lebbon manages to infuse new ideas into this standard theme, making a survival story deeper than usual with ideas of human endurance and long-simmering revenge.

The hero of the story is Chris, a happily married father of two whose only real claim to fame is his dedication to endurance sports. After realizing that he’s aging and out of shape he dedicates himself to getting in shape, a commitment that will lead to his eventual participation in triathlons and ultramarathons. Possibly the most interesting thing about Chris is that his behavior and thoughts lead the reader to believe he is likely an addict. An exercise addict. His desperation to feel the rush of endorphins, the pain of physical exertion and his euphoria when breaking through fatigue and normal limitations are indicative of such addiction. In this case it serves him well and it’s this ability that will lead, completely unbeknownst to him, to his being selected by the Trail to be the target of a hunt. They only select targets who have the ability to pose something of a good fight.

The Trail is a clandestine organization that arranges a very special sort of hunting expedition, one in which rich people can pay to hunt a human. The basics of the hunt are similar to the classic 1924 short story “The Most Dangerous Game” by Richard Connell, and its many subsequent movie adaptations and fiction interpretations. Chris is given basic supplies and he must outrun and outlast those who are hunting him. The hunters are well armed and their success seems to be a forgone conclusion, but Chris has the will of a champion athlete to win. He also has the added motivation of saving his family, who were taken prisoner by the Trail and used as hostages to force Chris to participate.

The hunters are rich and entitled and believe they will prevail and kill Chris due to their technology, firepower and general hubris. They are just sketches, not fully developed characters, and they don’t need to be any more than they are. Much like the killers in the film Hostel they are easy to despise though they get little time in the spotlight.

Parallel to Chris’s story is that of Rose. She is a survivor of a previous hunt organized by the Trail, a hunt that she survived but her captive family did not, and she has spent years dedicated to finding the Trail and exacting violent revenge upon them personally. She is an interesting character but not nearly as compelling as Chris, and she does not get as much time allotted to her portion of the story. The supporting character of Holt, a man who plays an important part in Rose’s story, is very interesting and he has a satisfying character arc.

The novel also employs a structure reminiscent of journey or voyage fiction, which is one of its real highlights. Chris is left to complete a journey in much the same fashion as fiction heroes for thousands of years. In the mold of Odysseus from the Odyssey and Dr. Richard Kimble in The Fugitive, Chris moves from one trial to the next, meeting interesting characters and completing arduous tasks on his way to his ultimate goal. The book concludes with a satisfying confrontation between Chris, his family, Rose and the Trail that proves Lebbon can write thrillers as well as he writes horror.

Unfortunately for U.S. readers, The Hunt will only be available in the United Kingdom initially, for UK e-readers and in paperback from UK booksellers. Hopefully a domestic release won’t be too far behind.