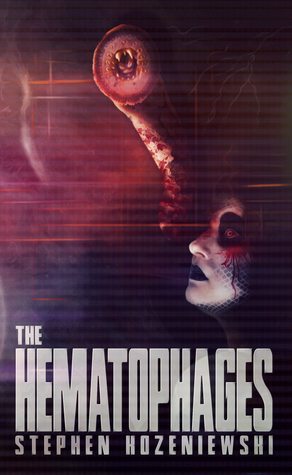 When I began reading The Hematophages by Stephen Kozeniewski, I didn’t think it would be a successful read. I figured it would take me two to three weeks and I’d end up writing a review that made me come off callous and disinterested. Thankfully, the story turned into a bloodbath of sorts, held my interest, and provided an ending that could have been a little better, but satisfying nonetheless.

The Hematophages shares the tour of the Borgwardt (a salvage ship). The main character, Ambroziak, has won a position with Hestle, a salvage corporation to expeditiously get the job done. The job is to retrieve a derelict ship, a ship that’s been a part of both human and alien legend. The race was to reach the battered wreckage on a plant known for its ocean of blood containing vampirous lamprey-like creatures. Regrettably for the Borgwardt crew, the lamprey weren’t their only adversary.

The beginning of this book was the most difficult for me, especially getting to know Ambroziak. She was crude, a drug addict (of sorts), flippant, and other various, negative descriptors. As the expert of the ship being salvaged, Ambroziak convinces the director over the mission to open a portion of the ship they were supposed to have left alone. A portion that had been submerged under the bloody water for decades.

So my thoughts on the book: I kid you not, it wasn’t ’til they reached the skinwrappers that the story got good. The voice of The Hematophages made me feel as if either the author or the character was so full of themselves they trapped me beneath an info dump. It was excessively, scientifically wordy, raunchy, and plain weird! Ambroziak was weird! She’s also why I both liked and didn’t like the book at first.

But the ending was pretty good. It put me in mind of a couple movies and books, without losing originality. The wording was still a bit much, but I couldn’t help but enjoy it. I even bookmarked where the best parts came in, sure to reread them on another day. The book turned into an eye-popping, pogrom of a read!

The Hematophages is one of those books where you have to trudge through some ridiculous situations, verbiage, and innuendo. If you survive all that, then you’ve got an audacious slaughterhouse to get through. Read this book!