The Heaven Maker and Other Gruesome Tales – Book Review 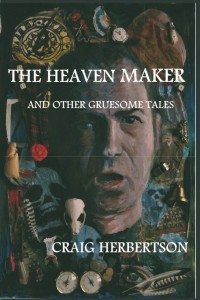 The minute I laid eyes on the title, I knew I had to read this book. I didn’t know what a ‘heaven maker’ was or why it might be gruesome, but the mystery of these questions drew me in. I’m very glad I gave this one a shot, too…author Craig Herbertson has a vivid imagination rife with brutal originality and terrifying concepts. If you’re a fan of short horror fiction, put this book on your Must Own list.

If you are not familiar with The Heaven Maker and Other Gruesome Tales, here is the plot synopsis courtesy of Parallel Universe Publications:

I cheated a bit by not reading this book in order. I don’t suppose it really matters where you begin an anthology, but this time I jumped straight to “The Heaven Maker,” which is toward the middle of the book, and started there. This story set the whole tone for the book and is a perfect example of the horror found within it.

Each story in The Heaven Maker and Other Gruesome Tales is written well and flows at a nice, even pace. I commend on Herbertson for his pacing; some short story writers tend to rush sometimes and try to reach the punchline faster than they should. Not so here; Herbertson pulls the reader into each story from the beginning and then delivers a sucker punch when it is least expected.

One of my favorite stories in this collection is “Gifts,” a rather short tale measuring only a page and half in length. This one is told from Santa’s perspective one Christmas Eve, however something is different this year…and it might be a very bad kind of different. The imagery in this story is very vivid, and the twist ending is unnerving to say the least.

My sole complaint about The Heaven Maker and Other Gruesome Tales is from an editing standpoint. I ran across numerous typos and errors throughout the book, more so than I think any edited publication should contain, in my opinion. Granted, this did not detract from my enjoyment of the book, however I feel it worth mentioning.

Otherwise, The Heaven Maker and Other Gruesome Tales is a big win for me. This is a solid anthology with some interesting concepts and horrifying realities. The book is available now in a variety of formats.