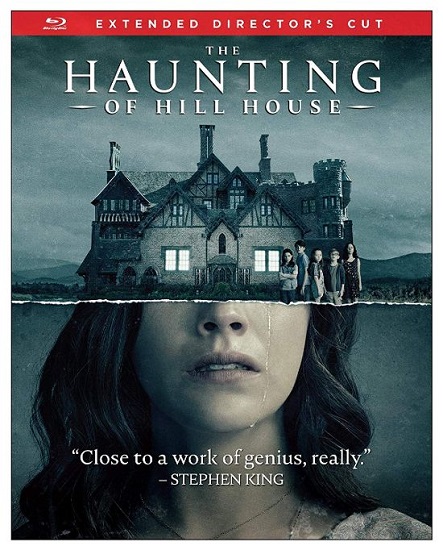 The Haunting of Hill House by Shirley Jackson is a monolith of a haunted house story that casts a long, deep, dark shadow over all other haunted house stories that followed it. It has already been made into a great movie, into a horrible remake, and has been ripped off and “homaged” to a hundred times. It has even been made into a limited series for the streaming service Netflix, and now, just in time for this year’s Halloween, into a Blu-ray of the full show. So, this is no doubt a tale you already know, should you get yet another version of this?

Directed and conceived by Mike Flanagan, one of the very best writers/directors of horror movies working today, it is a great achievement and example of how to take a rather short novel, make it last for ten, one-hour episodes, and keep it fresh, exciting, and yes, haunting throughout. Don’t worry, even if you know the Jackson novel front to back, and you’ve seen the masterful 1963 Robert Wise film adaptation called The Haunting a dozen times, there is still plenty in this series to keep you hooked for the full ten hours. That is because Mr. Flanagan expands the focus of the story from a small handful of investigators in a haunted house, to a large family, the Crains, that lived in the house until one dark and horrible night. But then the story keeps going, showing how the family moved on, or at least tried to, and tried to deal with what they lost, and what more they would lose in the future. Yeah, if you think you know the story of Hill House, you really, really don’t.

And that was a big risk for this show: taking a well-known and well-loved story like this one and turning it all on its spooky, ghostly ear. It was a risk I was sure would fail when I first sat down to watch it, but I am happy to say that the risk paid off. This is taking a kernel of a great idea and expanding on it, but doing so with respect and love for the source material while making something new and original. I cannot be happier with the result of Mike Flanagan‘s studious efforts. The same can be said for all the actors in here. Each and everyone did great work, but the standouts for me were Carla Gugino, young Lulu Wilson, and Henry Thomas. Add in some great special effects, atmosphere so thick you need a chainsaw to cut it, and a fun and chilling game of spot the ghost (seriously, keep your eyes wide open and split when you watch this) and you get a production that is worthy of Shirley Jackson‘s original terrifying tale.

Speaking of production, how is the production of this new Blu-ray from Netflix and Paramount? Well three of the ten episodes are presented here as extended, director’s cuts not available on the streaming service. Mike Flanagan also provides director/creator’s commentary on four of the episodes. So that right there is worth the price of picking this up, even is you are subscribed to Netflix.

Stephen King called this version of Hill House a work of genius, and I’ve got to agree with The King. There is not a dull moment to be found here and when it was over, I was happy with the resolution but I was left wanting more. I cannot recommend The Haunting of Hill House highly enough. DO yourself a favor and get it.