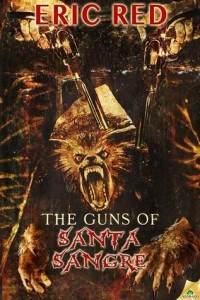 The Guns of Santa Sangre

For connoisseurs of the Old West, Eric Red’s The Guns of Santa Sangre has all the elements of a classic:

*It opens with a fast-and-furious stagecoach heist;

*It has outlaws who, beneath their coarse exterior, boast hearts of gold;

*It has cruel, corrupt representatives of the law, who deserve everything that happens to them, and more;

*It has touches of Seven Samurai and The Magnificent Seven…with perhaps a tiny wink in the direction of The Three Amigos;

*It has sacrifice and heartbreak;

*It has a beautiful heroine disguised as a boy, even though the disguise isn’t exactly perfect;

*It has a town drunk who hides a secret that has kept him alive…and acts as the key to his redemption;

*It has gunplay and horseplay;

*It has a treasure in silver waiting for the taking;

*It ends with the heroes riding off into the sunset, justice…and love…having prevailed.

Somehow, though, everything weaves together nicely to create a fun, rapid-paced yarn. The werewolves are given enough background to make their presence entirely logical; and the remaining—human—characters run true-to-type without quite becoming stereotypes. Their actions are at once unique to each and representative of what one would expect in a good Western.

Three gunslingers on the run from an American bounty hunter and the Mexican authorities meet a young Mexican peasant who convinces them to help his small village, now overrun by ruffians who have made their headquarters in the local church. Their reward: the silver statues and other artifacts in the church. All they need to do is kill the ruffians.

Sounds simple enough. Three against a dozen or so…no problem.

Until, of course, one factors in the supernatural. Ruffians killed by day rise again in the night as werewolves, insatiably hungry for human flesh…and they’ve almost run out of villagers.

Quick, smooth, easily read, The Guns of Santa Sangre satisfies on both accounts. It is an almost filmic rendition of the time-honored traditions of the Western, with a deftly handled incursion of the unnatural, with the two blended into a single, intriguing story.