The Gospel of Z – Book Review 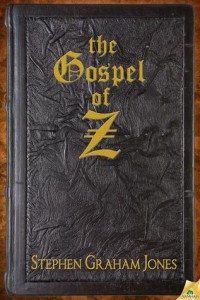 The Gospel of Z
Stephen Graham Jones
Samhain Publishing, January 2014
Trade paperback, 268 pp., $16.00; eBook, $5.50
By Michael R. Collings
In the “Thanks thanks thanks” section at the end of The Gospel of Z, Stephen Graham Jones notes that one of his early readers told him that the book was “too broken”; then he credits his agent for “targeting the one broken place that could fix the rest.”
In a very real sense, those two comments could stand for the entire story—The Gospel of Z is not simply another zombie novel. It is, in fact, a narrative about things broken: society, authority, community, individuality, institutions, lives, even hope. And, at the end, there is the overwhelming sense that at the deepest levels, something has been “fixed.”
The story takes place ten years after a zombie apocalypse—by the end of the book, ten years to the day. It concentrates on a single man, Jory Gray, and his week-long struggle to penetrate the secrets that have surrounded the apocalypse for a decade. To do so requires that he literally lose everything except his life…and in the end, even that. Yet his experiences with death and dying, with the undead and the long-dead, ultimately bring about a true apocalypse in the word’s original sense: ‘an uncovering, a revelation.’ He discovers and reveals truth.
Jory’s world is harsh. A former biology teacher, he is now a military conscript, first working at creating “handlers” (augmented humans who literally “handle” captive zombies), then assigned to a squad sent to test newly found corpses for signs of zombie-infection and destroy them. Transferred from task to task, he fails each, yet in doing so, he moves closer and closer to secrets that both the Military and the Church wish to keep hidden. Searching for a woman who has left him to join the Church—in fact,obsessed with seeing her again, speaking to her again—he brings those two opposing forces together until each reveals its own stake in continuing the postapocalyptic world.
The Gospel of Z is not for the faint-hearted. It has more than its share of grotesqueries and horrors, with sufficient blood shed for even jaded readers. But there is much more to it than a novel of destruction and gore. The storytelling itself is difficult, yet perfect for the story. Jones’ style is at times elliptical, circling around ideas rather than explaining them outright. His characters speak in the language of a postapocalyptic world, in which words have taken on new meanings; but more often than not, he does not pause to explain those new meanings. Readers must discover for themselves from the context what the characters are talking about, what they do, how they survive.
To compound the difficulty, Jones tells two stories in that same elliptical (I am tempted here to use the phrase ‘egg-shaped’) style. Intercut chapters lead readers carefully through the events leading up to the first wave of zombie infection, their pacing of the past matching Jory’s unravelling of his present until in the final pages, both narratives fuse at the climactic moment…and all is revealed.
Well…sort of.
The Gospel of Z is difficult in the best possible way. It demands much of the reader but tempers those demands with intriguing glimpses into human nature, into the dangers of belief and disbelief, into the horrors that humans can willingly or unknowingly inflict upon themselves. At times frustrating (especially in the opening chapters), it ultimately repays readers willing to immerse themselves in an unfamiliar world, to empathize with often unempathetic characters, and to endure horrors in order to arrive at a true and lasting apocalypse.
Recommended.