The Empty House and The Listener – Book Review 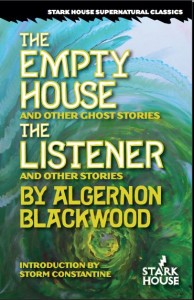 Algernon Blackwood (what a great name for a writer of weird fiction!) is one of those authors whose work I’ve wanted to read for a very long time but not yet had the opportunity until now.  Stark House Press is re-releasing a great deal of Blackwood’s work in trade paperback editions.  This collection includes the full text of Blackwood’s first two short story collections (originally published in 1906 and 1907), including several of his best known stories, along with a new introduction by Storm Constantine.

H.P. Lovecraft included Blackwood as one of the “Modern Masters” in his vaunted “Supernatural Horror in Literature” (all following quotations taken from Chapter 10 of “Supernatural Horror in Literature”), describing him as “inspired” and arguing that Blackwood had written “some of the finest spectral literature of this or any age.”  High praise indeed!  Lovecraft went on to say this about Blackwood’s body of work:

“Of the quality of Mr. Blackwood’s genius there can be no dispute; for no one has even approached the skill, seriousness, and minute fidelity with which he records the overtones of strangeness in ordinary things and experiences, or the preternatural insight with which he builds up detail by detail the complete sensations and perceptions leading from reality into supernormal life or vision. Without notable command of the poetic witchery of mere words, he is the one absolute and unquestioned master of weird atmosphere; and can evoke what amounts almost to a story from a simple fragment of humourless psychological description. Above all others he understands how fully some sensitive minds dwell forever on the borderland of dream, and how relatively slight is the distinction betwixt those images formed from actual objects and those excited by the play of the imagination.”

Lovecraft, unsurprisingly, complained of Blackwood’s “ethical didacticism” (Blackwood was a Catholic, and this informs at least some of his work, which would not have appealed to Lovecraft in the slightest), as well as Blackwood’s “too free use of the trade jargon of modern ‘occultism’” (Blackwood was deeply interested in the occult, joining several occult societies at the height of Britain’s interest in esotericism, and this too comes forth clearly in Blackwood’s fiction).

Lovecraft also commented on some of the stories included in this volume:

“Foremost of all must be reckoned “The Willows,” in which the nameless presences on a desolate Danube island are horribly felt and recognised by a pair of idle voyagers. Here art and restraint in narrative reach their very highest development, and an impression of lasting poignancy is produced without a single strained passage or a single false note. […] In “An Episode in a Lodging House” we behold frightful presences summoned out of black space by a sorcerer, and “The Listener” tells of the awful psychic residuum creeping about an old house where a leper died.”

Enough about Lovecraft’s views – what did this reviewer think of the collection?  In short, it’s outstanding, and there are far more hits than misses.  The three stories that Lovecraft mentioned – “The Willows,” “Smith: An Episode in a Lodging House,” and “The Listener” – were all as good as Lovecraft promised.  “The Willows” is often anthologized and now I can see why.  For me, the second story in the collection, “A Haunted Island,” was absolutely chilling in its ambience: a man is roughing it on what becomes an extraordinarily creepy island in a cabin when he witnesses a reenactment of a historical murder.  “The Strange Adventures of a Private Secretary in New York” about a clerk sent to retrieve blackmail material from the home of a lunatic was a fun thrill ride that could have come straight out of the pages of any pulp fiction magazine.  “Max Hensig – Bacteriologist and Murderer,” concerning what happens to a journalist when the man whose murder trial he is covering manages to escape justice, was another great thriller.

Several of the stories also provide a fascinating look at urban life at the turn of the century, mostly for recent immigrants, just as Blackwood himself did, struggling to survive and make their way in an entirely new world where they had to sink or swim, and where starvation was a very real possibility.  All in all, it’s a great mix of thrillers and supernatural horror stories, and unlike a lot of fiction from the early decades of the twentieth century, Blackwood’s prose does not come across as stilted or overly antiquated; it still sounds polished to a modern reader.  Many of these stories were genuinely creepy and I’m pretty jaded when it comes to horror and weird fiction.  I will certainly be seeking out more of Blackwood’s writing based solely on the strength of this collection.

This collection of Blackwood’s stories is highly recommended.  There are some genuinely terrifying ghost stories here.