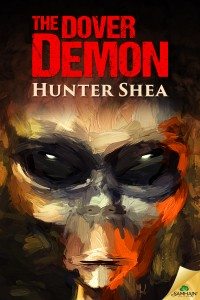 Hunter Shea is one of the most consistent and versatile writers of horror fiction working today. His latest release from Samhain Horror, The Dover Demon, does nothing but prove how good he can be. It is horror from cover to cover with themes of paranoia, conspiracy, creatures, science fiction and mythology that spans from ancient archaeological sites to the vastness of space. With great characters and a great take on UFOlogy and cryptids, this novel is sure to please.

The characters in The Dover Demon are what drives the story. The plot is sharp and entertaining, but it’s the investment in the characters and their fates that really keep things moving. Kelly Weathers is introduced first and comes across as a single 50-something woman struggling, and generally failing, with a serious alcohol problem. She morphs through the story from a paranoid, pitiful drunk to someone with a real past and future potential if she can defeat her demons.

Sam Brogna is the character through which the novel introduces the mythology of the Dover Demon. His comic book shop sells Demon-related merchandise to the tourist and cryptid hunter crowd, and is the one place where the definitive book on the Demon, Dover Demon: Nights of Terror, can be purchased. Along with his best friend since high school Tank, and Tank’s wife Steph, Sam turns out to know much more about the events of 1977, when the Dover Demon was seen, than anyone realized.

When the characters are forced to come to terms with their pasts and the realities of those 1977 events, it’s to save Sam’s son Nicky and his friend (and unrequited crush) Christine. Nicky is a great character, a 17 year old dealing with his parents’ separation, falling for his best friend’s younger sister and a blossoming interest in the Demon. He and Christine fall into the realm of the Dover Demon and it’s through their captivity and attempted rescue that the reader learns the truth about what the Dover Demon really was. And is.

The books only real problem comes into play during the final confrontation between the Demon and the heroes. The explanation of the history and plans of the Dover Demon is quite long-winded and far more detailed that the story calls for. Leaving some questions unanswered would have served the conclusion better. That said, Shea follows the climax with an epilogue that is both unexpected and satisfying. A few slow pages are not enough to keep this from being an excellent horror novel and a strong standout in the UFO and cryptid subgenres.