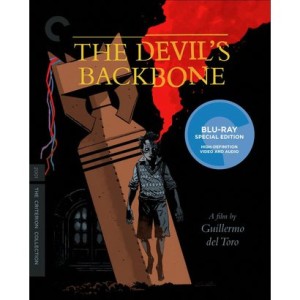 There is a reason why Guillermo del Toro has become the go-to director for many horror fans, comic book lovers, and recently, those that go gaga over giant monsters and towering robots. In short, genre fans. That’s because he himself is a fan and it shows with every movie he has ever made. Even when he’s not great, like his first big budget American movie (that came with plenty of big budget producer meddling) Mimic, he’s still pretty good. Especially if you watch his director’s cut of that big bug movie. And when del Toro is good, like the movie he made right after Mimic, he’s amazing. Yes, after a bitter first taste of Hollywood, Guilermo returned to his roots and made a relatively small budget (under five million dollars) but creepy as hell ghost story in Spain. That movie is The Devil’s Backbone, and if you have already seen it, then you know what a great film it is. If you haven’t seen it, then brother and/or sister, have you missed out. Read on and let me tell you about one of my all-time favorite ghost stories.

Set during the Spanish Civil War of the 1930s at an isolated orphanage, The Devil’s Backbone follows Carlos, a young boy who comes to the orphanage and finds himself embroiled in a gothic ghost story. Carlos befriends the local bully and soon starts having visions of a dead boy named Santi. Oh this isn’t a spoiler or anything. If fact, the ghost is both introduced early on and frequently shown. The idea behind this was to build not only fear and dread, which this movie does handily, but also sympathy for the lost spirit which is, after all, a dead little boy.

In addition to the ghost story, this film is populated with more than the stock horror clichés. There’s the one-legged woman who run the orphanage and her meager staff, and each and every character here has a story to tell. Moreover, their stories are interesting and that’s a sadly rare thing in genre films. Then there are the kids who are the real stars of the show here and unlike many child actors, these kids can appear both brave and frightened equally well, and most importantly, they seem real. They are not the overly precocious kids-as-written-by-adults-that-don’t-know-kids that usually occupy such movies. They are funny and silly and sometimes even greedy and mean spirited. You know, just like real preteen boys can be. Lastly there’s the ever present war and here it is used as more than just set dressing. From the giant, unexploded bomb that fell on the same night little Santi vanished and now rises like a rusting idol in the orphanage’s courtyard, to the allegiances to both sides of the conflict of the adults who run the place. Most of the “good” characters favor the losing side of the Republic, but there are fascists vipers in the mix, not to mention a secret cache of gold which always adds drama to the mix. Yes there are a lot of plot threads in this movie, but they are all strung up and later tied together masterfully with no ends left dangling by the time the credits roll.

Writer/director del Toro would return to many of these themes in his better known Pan’s Labyrinth, such as children, the supernatural, and fascist Spain. But don’t think for a moment that this movie was a test run for that one. This is del Toro at the top of his game, weaving believable and likable characters (and some not so likable) within one hell of a great looking and atmospheric tale of the supernatural. The Devil’s Backbone works as a drama, a period piece, and a very effective ghost story. It is a trifecta of near perfection and one of my favorite films from one of my favorite directors.

Now as good as this movie is, this new Blu-ray by the always excellent Criterion Collection is equally as superb. First and foremost, this film looks amazing in new 2K HD. Mr. del Toro always had a keen eye for visuals and on Blu-ray that really shines. The colors in this film have never been so bright, or the shadows so dark as they are here. This film is as beautiful as it is frightening. As for the extras, or as this disc calls them, “supplements” (always classy, that Criterion Collection), there is a director’s commentary track that is a port from an older DVD. But in sticking with the theme that discs from Criterion are the very best, even the audio commentary has chapters so you can jump to a specific topic Guillermo is talking about at any time. That’s just cool and I’ve never seen that done before, so bonus points to this release for going the extra mile. As for the other extras, oh boy there are a bunch of them. There is a new introduction to the film by del Toro. There is an optional mode of play for this movie that will pop up some of del Toro’s original sketches for scenes and concepts he used in the movie. There is a brand new interview with the writer/director called “Summoning Spirits” that runs over 13 minutes. There is a nearly 30 minute documentary from 2004 about the making of The Devil’s Backbone called “Ques es un Fantasma?” Yes this doc is in Spanish, but it has subtitles. There is a 2010 interview with del Toro about the Spanish Gothic genre that runs close to 18 minutes, and for all you subtitle haters, this one is in English. But if you hate subtitles, you probably have no interest in this movie anyway, so moving on… There is an interactive picture gallery of del Toro’s concept sketches for the movie. There is a featurette called “Designing the Devil’s Backbone” that is about 18 minutes. There is a new interview called “A War of Values” with a Spanish Civil War scholar that was very informative and is over 14 minutes long. Lastly there are a collection of deleted scenes, even more sketches and storyboards (that del Toro loves to doodle), and original theatrical trailer.

The Devil’s Backbone is a must have for lovers of movies, horror or otherwise, and this new Criterion Collection Blu-ray is easily the version to have. This movie has never looked or sounded better or came with more goodies. So this is a no-brainer. Get this disc, you won’t be sorry. It is very highly recommended.