Once upon a time when someone floated the phrase ‘zombie apocalypse’, the mainstream masses who utter a collective “Huh?”, and then we zombie pop-culture geeks would have to explain. We’d reference Romero, maybe throw in a little Fulci (just so we seemed like we knew stuff), then explain the basic apocalyptic plague scenario. If this was a cocktail party and we were around ‘real people’ (as my redneck uncles used to call them), we might try and wow them with some cultural awareness by explaining the difference between Romero zombies and the creatures who are a cultural phenomenon of the Haitian religion of vodou. We would be snooty about it, too.

But that’s so ten years ago.

Now you hear ‘zombie apocalypse’ on Jeopardy. They use it on news programs to describe any potential panic situation. (I heard a stock market analyst squeeze it into an assessment of the dollar’s stability in the global currencies market. Seriously). The zombie apocalypse is known now, it’s a thing. You can say it and people get you.

But, what exactly is it and if it happened who would survive it?

I’ve cooked up a Zombie Apocalypse Survival Scorecard for ya. An earlier version of this was included in my nonfic book, Zombie CSU, but I’ve made a few necessary tweaks. So, next time someone mentions the zombie apocalypse, you can still dazzle them with your insider knowledge of how we’d fare as a species depending on what kind apocalypse came to bite us.

SLOW ZOMBIES RISING AS A RESULT OF A PLAGUE. This is the most common variation on the standard George Romero model, and it’s a far more plausible and practicable one. These zombies are the slow shufflers. They have very little brain function; they have poor balance; they fear fire; it takes a headshot to bring them done.

SLOW ZOMBIES RISING AS A RESULT OF TOXIC CONTAMINATION: A number of films, with both slow and fast zombies, play the toxic spill card, as shown in films like The Living Dead at Manchester Morgue, The Grapes of Death, and Toxic Zombie,

SLOW ZOMBIES RISING AS A RESULT OF UNEXPLAINED RADIATION. This results in all of the recently deceased coming back to life. This is the classic George A. Romero Night of the Living Dead scenario. These zombies are the slow shufflers. They have very little brain function; they have poor balance; they fear fire; it takes a headshot to bring them done.

FAST ZOMBIES RISING BECAUSE OF A PLAGUE. This is the premise of the remake of Dawn of the Dead. Something starts the plague and it spreads very, very fast. Victims who die as a result of bites reanimate within seconds.

FAST, THINKING ZOMBIES RISING BECAUSE OF A GOVERNMENT EXPERIMENT GONE WRONG. This is the Return of the Living Dead model, and it has other tweaks on the model. The infected die over a period of a few hours and then reanimate as fully cognizant zombies. They can think, talk, strategies and work cooperatively. They also have a desire to eat only human brains, and their own bodies are remarkably difficult to kill. Even severed limbs are active, as if every cell in the body has become a separate being. How this works with an arm detached from the central nervous system, not to mention the supportive and cooperative structures of the rest of the shoulder’s tendons and bones, is a bit hard to explain (which is why even as a kid I always thought that films like The Crawling Hand were just plain silly).

FAST HUMAN ZOMBIES RISING BECAUSE OF A VIRUS. This was the model used in George A. Romero’s The Crazies (and its remake) and 28 Days Later. An event (a government experiment gone wrong in Crazies and a rage virus accidentally released in 28). The infected humans, especially in recent films, are incapable of controlled or rational thought and are, for all intents and purposes, fast zombies -even if they are technically alive.

DEMON ZOMBIES: Movies like Sam Raimi’s Evil Dead series and books like Brian Keene’s The Rising and City of the Dead use demonic forces as the reason the dead rise. The demons of Evil Dead possess dead (and sometimes living) bodies and turn them into raging, bloodthirsty killing machines that can only be stopped by cutting them into harmless pieces. In the Keene novels the demons inhabit all dead things, including insects and animals. Destroying the body of one does little since the demonic force can just switch to another host. 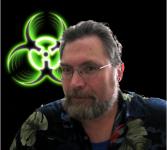 Jonathan Maberry is a NY Times bestselling author, multiple Bram Stoker Award winner, and Marvel Comics writer. He’s the author of many novels including Assassin’s Code, Dead of Night, Patient Zero and Rot & Ruin. His nonfiction books on topics ranging from martial arts to zombie pop-culture. Since 1978 he has sold more than 1200 magazine feature articles, 3000 columns, two plays, greeting cards, song lyrics, poetry, and textbooks. Jonathan continues to teach the celebrated Experimental Writing for Teens class, which he created. He founded the Writers Coffeehouse and co-founded The Liars Club; and is a frequent speaker at schools and libraries, as well as a keynote speaker and guest of honor at major writers and genre conferences. Jonathan lives in Bucks County, Pennsylvania with his wife, Sara and their son, Sam. Visit him online at Jonathan Maberry and on Twitter (@jonathanmaberry) and Facebook.

Here’s the book trailer for Dead of Night:

Praise for Dead Of Night:

“Jonathan Maberry is the top gun when it comes to zombies, and with Dead Of Night, he’s at the top of his game. Frankly, I’m shocked by how effortlessly he moves between the lofty intellectual heights of T.S. Eliot’s poetry and the savage carnality of the kill. Dead Of Night develops with the fevered pace of a manhunt, and yet still manages to hit all the right notes. Strap in, because Maberry’s latest is one hell of a wild ride. I loved it.” -Joe McKinney, author of Dead City and Flesh Eaters

“Jonathan Maberry has created an homage to death itself and an homage to the undead that is as poetic as it is terrifying. It’s a brand new and intriguingly fresh slant on the zombie genre that we all love!” -John A. Russo co-screenwriter of Night Of The Living Dead

“Maberry is a master at writing scenes that surge and hum with tension. The pacing is relentless. He presses the accelerator to the floor and never lets up, taking you on a ride that leaves your heart pounding. It’s almost impossible to put this book down. Dead of Night is an excellent read.” -S.G. Browne, author of Breathers

“It would be enough to say that Jonathan Maberry had topped himself yet again with an epic zombie novel that is as much fun as it is terrifying. But that he has also created a story of such tremendous heart and social relevance only further cements his place as a master of the genre. It also doesn’t hurt that in Dead Of Night he has created one of the most compelling heroines I’ve read in years. Dead of Night blew me away!” -Ryan Brown – Author of Play Dead

“Once again, Jonathan Maberry does what he does best; Take proven science, synthesize it and create something truly terrifying. In Dead Of Night, Maberry lays the groundwork for a Bioweapon that could very well create zombies in the real world. Combining great characters (I fell in love with Dez Fox from the moment she was introduced) and taut, blindingly fast action, Dead Of Night, is a runaway bullet train of a ride. This is Jonathan Maberry’s best writing yet.” -Greg Schauer, owner Between Books, Claymont, DE

“Dead of Night stands drooped head and lurching shoulders above most zombie novels. The nightmare increases exponentially – from minor outbreak to major crisis with unstoppable speed, building to a heart-stopping climax you won’t be able to put down.” -David Moody, author of the Hater and Autumn books