The Dark Verse, Volume III: Beyond the Grip of Time – Book Review 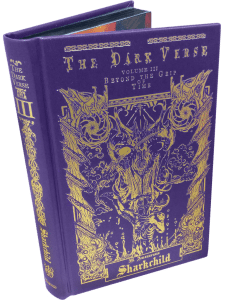 Beyond the Grip of Time marks the third volume of M. Amanuensis Sharkchild’s “The Dark Verse”, a series of books collecting stories that first appeared on the podcast of the same name. Sharkchild describes these tales as “occult, metaphysical, and fantastical horror”, but that only scratches the surface of the dark dreamscapes you’ll begin to wander as soon as you open the cover. This is the kind of cosmic horror and fantasy that takes you both deep inside yourself and farther away from reality than you’d perhaps care to imagine. It is indeed a vicarious journey beyond the grip of time, and Sharkchild’s singular vision is rendered succinctly through his archaic writing style.

The book itself, as a physical object, is a work of art. The purple faux-leather hardcover with its glossy golden illustrations (one on the front and one on the back), is stunning to look at and soft to the touch, and the weight of it pairs well with the psychological weight of the strange tales it contains. There are also two full color, two-page illustrations on the front and back inner cover, as well as a one-and-a-half page black and white one preceding each story. These gorgeous illustrations, provided by John F. Stifter, are detailed, yet still give just an enigmatic inkling of what’s to come.

There are twenty-six stories here, most of them being only a few pages in length, but skimming through the table of contents to see titles like “The Thief of Timeworn Lives and his Fortress” and “The Truncation of Being By Folding Flesh” will give at least a bare idea of the overall tone of the collection. These are tales of people entwined in the inner workings of forces far beyond our ordinary range of perception. Many of the main characters are either adepts or acolytes in various occult paths. Some are merely ordinary people caught up in extraordinary things by no fault of their own. Almost invariably there’s the sense that in Sharkchild’s fictional world, humanity is merely like a grain of sand in a vast and vastly unknowable desert. Whether the story falls into the horror or fantasy genre, chaos tends to trump order, at times literally tearing it apart.

There are stolen and murdered souls, dark bargains best left alone, the exploration of worlds beyond worlds, people playing God in the most clinical manner, flesh offered and flesh taken, the innocently spoken words of Unthinkable Curses, and a whole host of obscene and terrifying creatures brought to vivid life. There’s all of this and a lot more.

This third volume of The Dark Verse reads fine as a standalone collection of weird fiction, but given the depth of imagination in the stories, and the book’s immaculate presentation, you’ll likely find yourself wanting to pick up the other volumes as well. Beyond the Grip of Time is a beautiful tome all around. Highly recommended.