The Dark at End of the Tunnel – Book Review 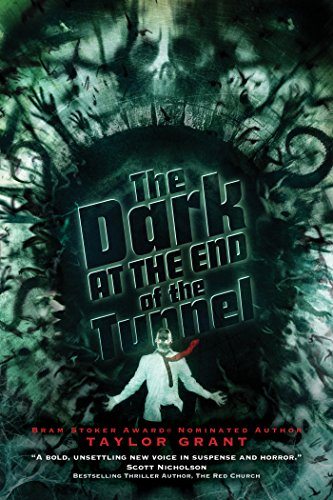 Author Taylor Grant has been around the block. Just looking at where he’s been published reads like a who’s who of the horror fiction world. Now some of his stories have been brought together for his first collection, The Dark at the End of the Tunnel.

Included are ten short stories that showcase Grant’s talents as a contemporary speculative fiction writer. At the core of every story is the evolution of something – be it a work-related psychosis (which seems to happen in a few of the tales) or stagnant paranoia brought on by something hideous lurking around the corner (not necessarily in the physical sense, either), and not to worry for the gorehounds, Grant isn’t afraid to get a little bloody when it comes down to it. And generally, the ones afflicted are predominantly men, with few women popping up in the collection. The stories rely mostly on Grant’s abilities as a storyteller, with great care and thought going into every word.

His Bram Stoker award nominated short story, “The Infected,” is in this collection, and is well worth the price of admission. In it, a man comes across his father’s incomplete manuscript and sets out to finish it, but unforeseen circumstances hinder his progress.

Aside from “The Infected,” a few stand-outs include the horror/sci-fi hybrid “Gods and Devils” in which a father’s love is put to the test; “The Silent Ones,” where a man slowly disappears before his very eyes; and “Intruders,” a story slightly reminiscent to the film They Live.

The Dark at the End of the Tunnel is an impressive collection that is sure to delight readers who enjoy a good mix of the psychological and the gruesome.