The Curse of the Mummy – Book Review 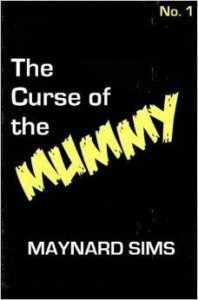 Len Maynard and Mick Sims (now simply Maynard Sims) are a widely known, well respected British duo, authors of countless short stories, novellas and novels in the dark fiction area. Their work ranges from horror to crime, from thrillers to supernatural stories. In addition, they have been successful editors and publishers in the above genres.

It’s no secret that they have constantly been included in my personal list of favorite writers for a long time (although, admittedly, not the whole body of their work has met my approval), so any new product of their fertile creative minds triggers my unconditioned interest.

The Curse of the Mummy, the first in a series of six novelettes devoted to the revival of classical monsters to be published by Hersham Horror Books, is penned by Maynard Sims, whose task is to put new life (pun intended) into the time honored theme of Egyptian mummies.

In just fifty-one pages, the authors offer a very original take of the subject by recreating the atmosphere of post-war London and portraying a young actress, now sadly unemployed, desperately trying to find work who ends up grudgingly accepting a job on stage as a simple tableau vivant. Unexpectedly, the job includes, as an extra bonus, not only a true friendship with a fellow “actress,” but also the romantic interest of a young male singer who starts to court her.

For those of you who wonder what on earth all this has to do with mummies, I strongly advise to buy and read the book. Never fear, you’ll meet the Mummy all right, but I don’t want to spoil the pleasure of discovering how and why.

Needless to say the story is beautifully written, the narrative style is engrossing, the characters nicely drawn and the dialogues effectively shaped. Everything is delightful and up to the expectations of the most demanding readers (including myself).