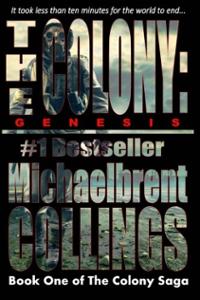 I’m a little bored with stories about zombies.  Don’t get me wrong, I like them plenty, it’s just that I’ve read a lot of them and most of them tend to be pretty similar.  So I wasn’t quite sure how I’d like Michaelbrent Collings’ first novel in his new zombie series, THE COLONY: GENESIS.  I need not have worried – it’s really fast-paced, it’s engagingly written, and yes, it does have something new to say about zombies.  It’s also the start of a new series.

Ken Strickland is a pretty ordinary guy: he’s a high school teacher living in Boise, Idaho, with his wife and three young children.  The day begins ordinarily enough – Ken is giving a test to his students – when they witness a plane falling out of the sky.  Then another.  Then all hell truly breaks loose when half of Ken’s students begin savagely attacking the other half, tearing them to shreds and shrugging off horrific injuries.  Those bitten also quickly turn into brutal, unthinking killers.  Ken survives the initial onslaught, but knows that his family is downtown, so he begins a desperate quest to (1) simply survive and (2) try to save his family, eventually joining a small number of other survivors of the catastrophe.  This isn’t an ordinary zombie novel, and to be clear, it’s not even truly a “zombie” novel in the sense that it involves the dead coming back to life to consume the living; the seemingly mindless killers are still alive, but are driven to kill in the same way that the infected of the film 28 Days Later or Steven King’s CELL are.  It quickly becomes apparent that there is some weirdness (beyond the obvious) going on here.  For one, why did roughly half the population suddenly become mindless, savage, and enraged, while the other half were unaffected?  For another, why do the killers periodically stop what they’re doing, in unison, and pause before resuming their killing rages, and why are these pauses growing shorter and shorter?  And what’s going on with the insect populations, which also seem to be behaving strangely?

There is one element of GENESIS that I should note because I think it could matter to some readers: the book ends on a cliffhanger.  We’ve been following Ken as he and his companions make their way through the zombie-infested ruins of Boise to the last known location of Ken’s wife and children throughout the book and, well, we don’t yet know what their fate is at the end of the book.  We also don’t yet come to understand why or how any of this happened.  We just have questions, and few answers by the end of the novel.  I didn’t find it unsatisfying, as two sequels are already available, but some readers might be annoyed by the fact that this isn’t truly a “stand-alone” kind of novel.  Frankly, I am genuinely curious about the circumstances surrounding all this.

THE COLONY: GENESIS is a quick read: the action is very fast-paced and tends toward the cinematic.  Characterization is not deep (but then again, this is a story about people just trying to stay alive and facing almost impossible odds, so there isn’t that much opportunity for deep reflection and motivation).  If you’re looking for a quick read of survival horror, and an interesting take on zombies, then I would highly recommend THE COLONY: GENESIS.