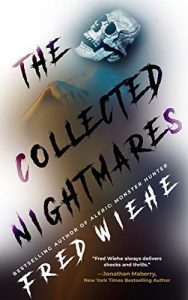 Hello there, horror fans! Are you familiar with the saying, “No Rest For The Wicked?” Well, it seems to be a maxim that Fred Wiehe applies to his work. He may not be wicked, but he definitely knows how to write about those who are. The Collected Nightmares, recently released by Black Bed Sheet Books, is vast! We’re talking nearly 500 pages that include two novellas, twelve short stories, and seventeen poems. This author is not one to rest upon his laurels. The reason? Pain caused by an accident and the acid rain that lands on the injured party in multiple forms, all of which Wiehe has noted for us in the heartfelt intro.

This might sound odd, but I especially enjoy works written by those who deal with pain on the daily. It isn’t because I’m some cruel bastard who gets a cheap thrill from the suffering of others.  No, it’s more the feeling of meeting another member of the tribe I belong to as well. Suffering chronic pain puts a drive into a creative person like nothing else. Not even love can surpass the determination to leave a legacy and the chance to escape into another world, like the misery of pain does. Next to that is the anger hanging onto pain’s coattails. You’ve got to express that shit somehow or go mad. Wiehe’s fierce prose and valiant poetry are red hot with that expression. Ready to dig The Collected Nightmares? Then hold onto your hats, we’re going in!

“Pretender” starts us off on the right foot as we follow author Frank Lester who is running late for his own book signing on Halloween. At first, he is jazzed about being in Barnes & Noble, but elation dies quickly when someone tells him that his father dropped by. Many of us would be cheered by the prospect of at least one friendly face in the crowd, but that’s not the case for Frank. His father is dead, so how the hell could he pop into any store, let alone talk to a clerk? Looks like somebody has attempted a prank in very poor taste, but why? As the story progresses, spirits and Halloween customs assert themselves. Could a mask help Frank escape what’s coming after him? Perhaps giving out Soul Cakes in the more modern form of candies will appease the demons? Frank keeps hearing, seeing, and smelling clues. Is it just his imagination or signs of impending doom? Just when you thought Halloween was scary enough, Wiehe shakes your sanity. Intense!

Right after that fine piece of fiction, we read “Penny’s Song,” the first of many poems in this volume. Short, sharp, and frightening, Wiehe’s poetry adds much flavor to The Collected Nightmares.  These are powerful poems that tell us a lot about Fred and definitely express some of that anger I mentioned. A good example is “Not Dead,” which features the phrase:

There’s a lot more to this poem that I want you to read and appreciate. This is one of the best and most direct poems about what it’s like to keep your life, but not yourself as the result of events beyond your control. That, friends, is real life horror. We don’t want others to feel sorry for us. Hell, we don’t even know how we feel about you. Just understand that we are different now and there’s no chance of turning back even if we could. “Rebirth” and “Succubus” are full on terror about creatures of the night.

“Shoot Me” is a frightening flash piece that will surprise readers and is a heartfelt piece of writing. “The Collection” is a great slam against those bullies and mean people mentioned in the introduction. It’s a pleasure to see that their money can’t protect them and their bullshit reputations all the time! There are creatures out there who only want one thing, no substitutions. You can whine all you want, Mr. Applebee! See you soon! “My Only Daddy” is a frightening tale with a sharp twist. The narrator becomes alarmed when his son starts talking to people he can’t see and acting out. Surely this is not the little boy he and his wife raised? Well, his wife is gone now, due to mysterious causes. While the man is doing his best, his son ramps up the odd behavior. A stop must be put to this and there’s only one way to do it! But was it the right one?

One story in particular really stands out as a frightening fable about those who hurt others for fun. “The Reckoning” is beautifully written with just the right amount of terror mixed with a very important message. When a group of girls who take lessons at a riding stable start insulting the girl who works there cleaning stalls, things get out of hand fast. Yelling turns to violence and it looks like somebody might even die. The stable’s owner jumps into action, but instead of shouting at the girls or threatening to tell their parents, he insists they listen to a story. This isn’t just any old fairy tale, either. No way, this is a true story and what it reveals is chilling.

The Collected Nightmares is a genuine 5 STAR READ! Fred Wiehe should feel damn proud of what he’s accomplished here and we’re fortunate that he’s decided to stay among us and challenge our brains with his words. I really enjoyed his twisted tales and think you will, too! Fred Wiehe is a professional author and a member of the Horror Writers Association who’s written many popular books including Aleric: Monster Hunter. Be sure to follow him at: http://www.fredwiehe.com. Black Bed Sheet Books has done a great job in producing such a powerful read and I also really dig the cover art. Want to learn more about them and the other cool titles they offer? Then visit their website at: www.blackbedsheetbooks.com. They even have the only authorized biography of the legendary Vincent Price by the master himself!