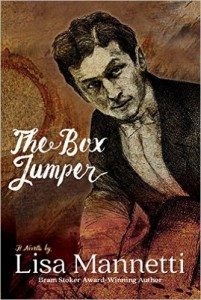 Lisa Mannetti’s The Box Jumper is a novella that seduces you with exquisite prose, keeps you wanting more due to a a teasing narrative from an unreliable narrator, and leaves you with the bittersweet aftertaste of existential angst. It is a mesmerizing (if challenging) combination of a mystery, bio-fictional drama, and a slowly developing touch of the supernatural. Much of that challenge has to do with the non-linear telling of the story by our main character.

Leona Derwatt is the long-time assistant and confidant of legendary magician and escape artist Harry Houdini. In the parlance of the magic trade she is a box jumper, one who assists the magician in pulling off the tricks of his trade. Leona is also essential to Houdini’s later stage of his life which centers on exposing fake mediums and their séances. The practice makes Houdini a few enemies that not only affect his life but haunts Leona’s far after Houdini’s death.

It is the narrative of this haunting tale that makes it both a challenging read and one that surrounds the reader with awe and mystery. The first person narrative is that of Leona’s and it is the type that we believe at first but then question. She leaps back and forth to different time frames. One is in the 20’s when Houdini is still alive and the other is in her later years as she is confronted by unwelcome reminders of the past. Some of the narration is fairly straight, especially those where we learn about Houdini, Leona’s complex connection to him, and his obsession with fake mediums. Other parts reads like a fever dream. The narration is always involving and beautiful, a testament to the author’s poetic skills. The darkness of the story hold you partially because Leona seems so real and alive.

Another successful touch is the author’s combining of historical characters and those that are fictional. Leona is the lead fictional character, yet much of the tension evolves around Houdini and Sherlock Holmes writer Arthur Conan Doyle, whose belief in the supernatural is threatened by Houdini’s exposure of the fake psychics. I believe the other protagonists in this tale (such as Emory, a competing magician, and Evelyn, a medium with questionable tactics and motives) are fictional yet Mannetti blends the real and fictional so well together that I would not be surprised if they, or a factual equivalence, actually existed.

The Box Jumper is fairly short at just over 100 pages, so it is important not to give much away. Yet it is not really the plot that I recommend it for – it is the joy of seeing a talented and gifted writer weave a literary spell. It is the writing that shines and if the non-traditional telling is a bit challenging, the writing is not. This is one of those books that may be lumped into the dark fantasy genre but deserves to be read by anyone who loves a quality novella.