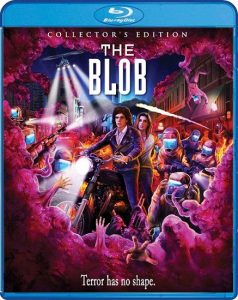 Gather around, children, and I will tell you of a magical time when horror movie remakes were made with care and reverence to not only the original, but to making a good fright film even better. Yes, it’s hard to believe there was ever a time, but it’s true. So it was with 1988’s remake of the 1950s creature feature, The Blob. This take would feature a far more interesting script penned by Frank Darabont, able direction by Chuck Russell, and outstanding gore effects that still hold up today, 31 years later. So three cheers, then, to Scream Factory for releasing a new Collector’s Edition on Blu-ray. So without further ado, let’s get to it.

The Blob is great fun. It’s basically the same story you no doubt know already, but it modernizes the plot, puts a sinister spin on it (never trust the government), and for the gorehounds out there, is pretty damn gruesome with some amazing special effects. And hey, no near-thirty-year-olds (Steve McQueen) playing a “kid” out to show the “grownups” how it’s done. I mean, I love McQueen, but him playing a teen was a bit of a stretch. Kind of like Caroline Munro playing a high school student in Slaughter High at the age of 37, but I digress. There is a lot to like in this one, from the creative blob kills, to a far more menacing blob than the one we got in 1958, to some clever satire of horror movies that were popular at the time, to actress Shawnee Smith doing very fine work as a not-helpless heroine and looking cute as hell while she does it. But really, the star of the show here are the incredible effects. Whether it’s a guy getting sucked down a tiny drain by his face, a homeless man being melted in half, the jock boyfriend getting dissolved right before your eyes, or the sheriff floating around in the pink goo, these bits all hold up very well today.

Let’s get to the extras that are on this new Collector’s Edition Blu-ray from Scream Factory. There are three audio commentaries found here. One with actress Shawnee Smith, one with director Chuck Russell and film historian/producer Ryan Turek, and then one with director Russell, special makeup artist Tony Gardner, and cinematographer Mark Irwin, moderated by horror filmmaker Joe Lynch. Then there are a pile of interviews. A dozen of them, to be exact. You got a two-parter with the director, notable actors like Jeffrey DeMunn, Candy Clark, Bill Moseley, the cinematographer, the makeup guy, the mechanical effects team, and more. Then there is a behind-the-scenes featurette focusing on the impressive special effects, followed up by theatrical trailers, a TV spot, and a stills gallery to bring the goodies to an impressive end.

The Blob is one of those rare remakes that eclipses the original. No offense meant to the ’58 Blob, but this one does about everything better, from direction to acting to the amazing special effects, the ’88 Blob just excels across the board. I love this goopy creature feature to pieces and so I can easily and highly recommend this one. Get it.