The Blackening of Flesh – Book Review 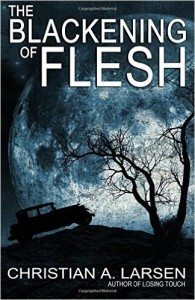 Christian A. Larsen’s previous novel, Losing Touch (2013), told the story of a man increasingly unable to keep in contact with his world, physically and otherwise. In The Blackening of Flesh, Larsen delivers a subtle but important twist on that idea: Jared Dix discovers that he is increasing unable to keep in touch with the world of his psyche, even of his soul.
Larsen introduces his tale within a tale in an “Author’s Note”; after something horrendous happens near us, our first reactions are along the lines of “I never thought it could happen in my hometown.” Yet horrendous things happen everywhere, often to people who outwardly seem normal, well-balanced, essentially sane. There must, he contends, be a “why,” an answer that makes everything understandable; but those answers “are never simple, and sometimes, they aren’t what we think they are at all.”

Jared Dix is a loner. His parents are okay, but they spent more time with his younger brother, Steve, a high-school freshman, and his middle-school sister, Lisa. They are popular; Jared is not. They are growing into solid, competent adults; Jared, at eighteen, is not. On the cusp of graduating, he has never dated, has no athletic skills, is around average academically, has a dead-end job delivering for a local drugstore…and strange black marks on his skin. He meets another loner, Monica, and abruptly find himself in the midst of a mystery.

In the 1930s, the Cerutti Gang had been killed in the basement of the house the Dixes now live in. Their cache of diamonds had never been recovered, and Monica is determined to find out more about the house, the surrounding acres, and the gang itself. Jared is equally determined to…well, to see more of her than her sweater shows. But gradually, he feels drawn into her story and into the fact that there are ghosts in his house. And that they are determined to pull themselves into the real world and take up their old profession as mobsters.

Jared’s struggle against the mobsters—including the one that wants to take over his body—accounts for the story-within-the-story. As the circumstances become more critical, Jared is forced to conclusions and finally to actions that he could never normally have contemplated. All he knows is that he has to save his family and put an end to the Cerutti gang’s reign of fear and terror.

The external frame story concludes the way Larsen’s rather laconic foreword suggests that it must. Something horrendous happens. The survivors ask themselves “why,” knowing that they will never receive an adequate answer.

But the readers know. And it is terrifying.

The Blackening of Flesh has a few technical flaws. There are some misplaced words, some redundancy, especially when the readers are inside Jared’s mind. But these are easily overlooked by the sheer daring of what Larsen attempts: a straightforward, naturalistic story of a lonely boy apparently taking revenge on a family—and a society—that has ignored him, coupled with a supernatural tale of ghosts, of possession, of vengeance, of struggles for the salvation of uncounted souls.