The Best Science Fiction and Fantasy of the Year Vol. 8 Coming to You on April 10th 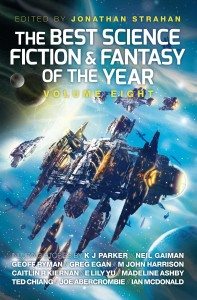 The Best Science Fiction and Fantasy of the Year Vol. 8

edited by Jonathan Strahan
The celebrated series comes to Solaris on 10th April (US and UK)
$19.99 (US) ISBN 978-1-78108-216-4
£13.99 (UK) ISBN 978-1-78108-215-7
Available in paperback and ebook
“…Strahan has hit them all out of the park in his Best of the Year series…” – Tor.com
“…demonstrate[s] a knowledge of and affection for the fantastic that rival editors would be hard-pressed to match” – Publishers Weekly
The celebrated The Best Science Fiction and Fantasy of the Year series comes to the UK – Solaris is proud to be the new home for the latest volume in Jonathan Strahan’s critically-acclaimed SFF anthology series! The best, most original, and brightest science fiction and fantasy stories from around the globe from the past twelve months are brought together in one collection by the multiple-award-winning editor. This highly popular series is released in the UK for the first time and includes stories from both the biggest names in the field and the most exciting new talents, including Neil Gaiman, Joe Abercrombie, Karin Tidbeck, An Owomoyela, Madeline Ashby, Lavie Tidhar, Charlie Jane Anders, Geoff Ryman, Caitlin R Kiernan and many more. With a fantastic range of diverse authors and cutting-edge science fiction, this essential book is an established series in the US but has only been found on import in the UK. It now joins Solaris’ high-profile anthology list.
About the Author:
Jonathan Strahan is an editor and anthologist. He co-edited The Year’s Best Australian Science Fiction and Fantasy anthology series in 1997 and 1998. He is also the reviews editor of Locus. He lives in Perth, Western Australia, with his wife and their two daughters.
www.jonathanstrahan.com.au