The Best Horror of the Year, Volume 11 – Book Review 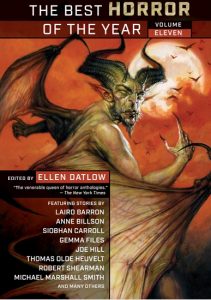 Every time I happen to read a new Best Horror of the Year compiled by Ellen Datlow, I can’t help but admire her for the tremendous amount of work taking place behind the publication.

She’s obviously spending an enormous portion of her time by browsing, examining, and finally choosing among the huge load of stories that appeared, during the previous year, in countless genre magazines, fanzines, websites, and of course, books (both collections and anthologies).

In addition to what she deems to be the best annual short fiction in the horror genre, she’s always providing an invaluable summation of what noteworthy books have been published (novels and non-fiction included).

The present volume assembles twenty-six short stories or novelettes penned by authors from the USA, the UK, Canada, Australia, Europe.
Among this veritable feast of horror short fiction, I will pinpoint my “magnificent eight.”

“I Remember Nothing” by Anne Billson is an unbelievably weird, horrific tale featuring a man and a woman waking up, feeble and confused, in the middle of an unspeakable nightmare, while “The Donner Party” by Dale Bailey is a “comte cruel” which showcases the author’s uncanny storytelling ability in depicting how a delicious, peculiar but disreputable dish can become the hallmark of social rank.

Ray Cluley provides “Painted Wolves,” an excellent, insightful piece blending African wilderness (filmed by a TV crew) and human wickedness, and Joe Hill provides the tense, splendid “You Are Released,” about a civilian airplane caught in the middle of a possible nuclear war.

In “White Mare,” a disquieting tale with an extremely disturbing ending, Thana Niveau portrays the unusual Halloween traditions of a British village and their consequences on an unwanted American family, while in the superb “Shit Happens,” Michael Marshall Smith describes the unexpected havoc aboard a ship turned into a conference venue, when a mysterious waterborne disease makes people go crazy.

Orrin Grey’s “No Exit” is a perceptive tale investigating the true nature of a forgotten massacre of a class of kids riding a school bus and of the horrible deaths suffered by their murderers.

Once again, a book no horror fan should miss.