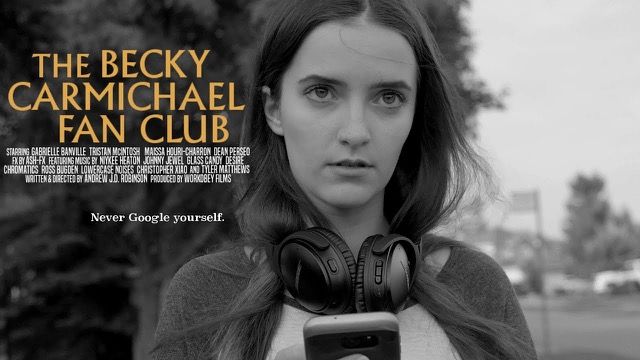 Movies these days are passionate when it comes to symbolism. Instead of coming right out with the message, they attempt to share through a number of situations set in motion that distract. These obstacles, in most cases, cause confusion and leave the viewer in a lethargic state instead of projecting them into what could be a fabulous ending.

The Becky Carmichael Fan Club is about, well Becky Carmichael. She’s a famous musician who’s hit a slump. She’s not played nor written anything for a while, leaving her fans melancholy. Literally! Instead of taking up a hobby until her next release, they decide to find ways to reach out to her. They play acoustic versions of her songs, post on FaceSpace to share and converse with her, and much more. What she doesn’t expect is to become a sort of godhead to the fanatics in some sort of cult. Her confusion becomes depression when she later discovers someone close to her may be the cause of it all.

When the movie began, I instantly became irritated- the movie’s in black and white! But it bounces to color later, only to return to B&W. I couldn’t determine the significance, but that’s not so bad. The soundtrack was. The female who recorded the music must have a girlfriend of the director or producer and it dominated sound. Another issue for me was when they were supposed to be looking at images, on a mobile phone, after a Google search. They were supposed to be on a website but I could see the reflection on Jesse’s eyeglasses. He wasn’t thumbing through images but swiping to and from the home screen- I could see it mirrored on his lenses! That was pretty funny, but enough on the negatives.

I did find a message in The Becky Carmichael Fan Club movie. It touched on subjects like courage, cyber-bullying, stalking, cults, information invasion, and social awkwardness. It also shared the obsession of social media. It’s not until the movie is near completion that the true purpose arises, but the ending was a bust. The meaning fizzled as it ended as most horror movies from the 80s did.

It’s a small production, but if you can tolerate dominating music and minor acting, you may enjoy The Becky Carmichael Fan Club. I believe this movie short released this summer and is available on YouTube.