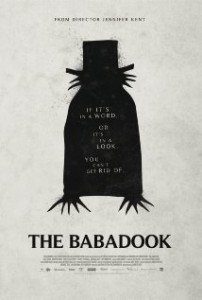 Reviewed by Matthew Tait
Earlier this year, South Australian author Sean Williams posted the trailer to an up-and-coming independent horror excursion called The Babadook. To say my interest piqued immediately was an understatement, not only because the filming locations were local, but because the trailer displayed something genuinely unique: a dark, domestic outing rooted in suburbia but spliced with an almost cavalcade feel. Within the first few moments I was under the impression The Babadook might be a ‘footage’ film – if only because what I was witnessing on screen felt so genuine and raw. Several moments later I realized the error, having been momentarily fooled because I was observing real, stylized performances that cut to the bone. Cobble this with an effective musical score (and a storyline somewhat evocative of literary dark fiction), and you have a film showcasing potential success.

But The Babadook is more than just a success; it’s a triumph of independent filmmaking.

Set in Adelaide, Amelia is a widow and single parent raising Samuel – an eccentric, somewhat hyperactive child who’s inability to fit in at school (as well as acclimatize to his own family), is making simple day to day living a chore.  Losing her husband in a car accident – a calamity that took place on the drive to give birth to Samuel – has given rise to an existence of alienation and despair – especially on Samuel’s birthday. Though it’s a challenging relationship, the two still share a close affinity, and Amelia’s attempts to pacify her son’s worsening dreams lead to a nightly story hour of classic fiction – fables from old where the monster is always banished. These are fears that have trickled into the day, and Samuel has taken to designing makeshift wooden weapons in a personal battle with the unseen. Among the books at Amelia’s disposal is one that she cannot remember purchasing … The Babadook – a macabre, beautifully illustrated fairy-tale featuring gaudy pop-ups and sinister rhymes. Once read aloud, the cadence acts as a summons to something beyond the veil.

What shines in The Babadook is not so much the story; it’s not even the more frightening moments. No, what works here are the subtle things employed: the sepia-toned suburbia, the stark performances. Child actor Noah Wiseman is a revelation, displaying sympathy and aversion in equal measure. The mother and child relationship is rife with magnetism and feels utterly genuine. Small, memorable cameos appear (most notably Daniel Hershall who played John Bunting in Snowtown), whose presence here is concrete despite the brevity of screen time. And lurking behind it all is the domestic aspect: an absent father looming over proceedings like the dark spirit of the Babadook itself.

Make no mistake, though: this is a film intended to disturb, and those key scenes designed for this (even for individuals schooled in the genre), can be genuinely unnerving. An original creation that is at times cartoonish, and at times malign, the Babadook reaches from beyond the fabric of another reality to slowly engulf and possess. To get the message across, writer and director Jennifer Kent has employed some slick camera work and effective compositing to create an atmosphere where our fears – in this case the dread of a family torn asunder – are duly amplified in a process that goes far beyond the limits of resources at hand. Touching, gritty, and starkly relevant, The Babadook is slow burn horror at its absolute finest.