The Adventures of Kyle McGertt: Hunt for the Ghoulish Bartender – Book Review 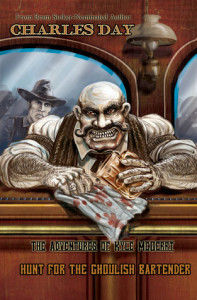 The Adventures of Kyle McGertt: Hunt for the Ghoulish Bartender

This is the first YA novel I have ever read. It’s also the first horror Western I’ve read too. In both instances I had a pleasant surprise – I enjoyed it far more than I expected.

Charles Day has a very readable style and the action moves rapidly, though not at the expense of character and some vivid descriptions. The Ghoulish Bartender himself, though completely evil in his actions, is far more than a two-dimensional villain. He has a back story every bit as tragic as any of his victims – and an awareness of what he has irretrievably lost to become what he is – a fate that not chosen by him, but forced on him as a curse.

Nevertheless he has grandiose plans to spread the curse of the ghouls on every community he comes across. In this, only Kyle McGertt, inheriting the crusade of his dead father, can hope to stop him. Robustly violent, yet with some subtle humour, this short novel is the story of how these two opponents finally come confront each other for a final showdown.