The Absence of Light – Book Review 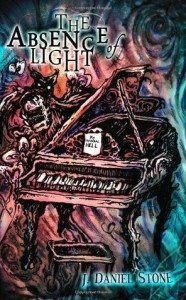 The Absence of Light

Banking on a young writer like J. Daniel Stone with a novel like The Absence of Light isn’t what Villipede Press would have done if Villepede were playing it safe. The Absence of Light is lush and lyrical, though not designed to appeal to people who want streamlined plots, transparent prose, or simple stories. First novels are often ragbags where writers try to explain life, so Stone has clearly come across more dark wisdom than most people. When William S. Burroughs, Mark Z. Danielewski or Kathe Koja rip through you like a drug, mainstream stories will never be the kind you’re hoping to tell. It’s a jangled and disturbing book that seeks to transcend through rituals and incantations. Villipede described The Absence of Light as “a tome of passion, a tour-de-force of angry youth scarred by lost pasts, the yearning to understand the hateful world around them, and the forever need to create” and that’s as close as anyone can get to putting a black-nailpolished finger on what Stone is trying to do in this debut.

This book is highly recommended for anyone who wants dark prose that seeks to transgress boundaries. The novel has the potential to open eyes and minds, in part because of its careful balance between journalistic documentation and nightmare hallucinations. The story is about a metal band (with nods to NIN, Tool, Black Sabbath, and others) and ghost hunters who are somewhere between legend tripping and drug tripping—but the jagged edges are where this novel is most alive.

New York City is too vast for any novel to capture, but Stone does a wonderful job of celebrating darker and seedier ways NYC can inspire imagination amidst desperation. In a Facebook post about the destruction of the legendary graffiti at the 5Pointz artist studios, Stone posted, “Without 5Pointz, The Absence of Light would not exist. There goes another cultural institution burned away by money thanks in part to the gentrification plague.”

The Absence of Light is important because it doesn’t seek to sugarcoat. In an industry competing for dwindling attention spans, Stone has tried to offer a call to arms, at least the goth set who loves dense yet sprawling prose. This is a first novel of the highest degree of difficulty and it’s extraordinary to witness the flashes of madness and brilliance. Finding beauty in horror is one of the most powerful ways to embrace the fleeting nature of consensual reality. It’s not easy to write a love letter to everything a young man might love. In a sense, there’s no way that horror and art and decadence and hauntings and music cannot help but sprawl across the pages—but the commitment to poetry and the ferocious obsession with trying to make sense of what it all means set Stone’s work apart, conjuring a compelling indictment of anything that seeks to hide, repress, or oppress the beauty that can be found in darkness. The drug use can seem ritualistic and one of the challenges of Outsider Art is that it always stands outside of what most people want or expect…but this is a book with raw power, vitriol, and integrity. It’s not a book that asks you to think; it’s a book that insists you inhabit the pages, mind engaged, demanding that you see all of its strange magic. Plenty of readers aren’t looking for a creepy book that’s trying to set their mind on fire—but for those who are, The Absence of Light might be your new favorite mindbender.