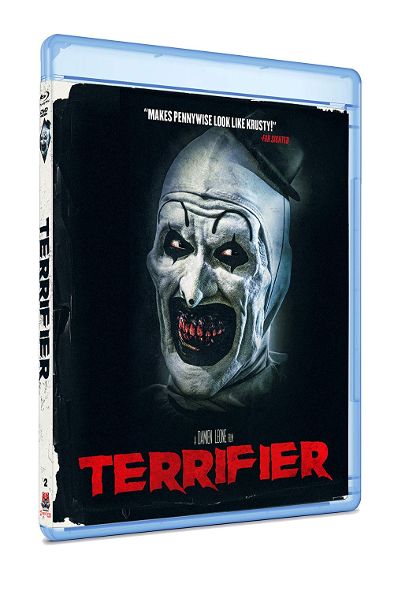 In 2013 an independent horror anthology came out called All Hallows’ Eve. I love anthology movies, I love horror films set on Halloween, so this was a lock for me to like it…but I didn’t. At all. I thought it was very poorly done with horrible writing and overall was just weak. Sure, some people out there loved it, but I was not one of them. Again: at all. Anyway it did have a character that acted as a mascot and sort of wraparound host, an evil, serial killer clown called Art. He was kind of cool but I wasn’t too impressed with him. Well, the writer and director of that film, Damien Leone, was impressed with Art, so much so that he wanted to do an entire feature-length film about his creepy clown, and Terrifier is that movie. Was it more of what All Hallows’ Eve offered, or was the second time clowning around the charm? Well, grab your greasepaint and your big bag of knives and let’s find out.

This movie is also set on Halloween. I guess that makes it easier for a guy dressed as a clown to walk around town without drawing too much attention. Two pretty ladies catch the eye of Art the Clown and very bad things soon follow. This is basically a slasher movie set in the city, with the majority of it taking place in an old, rundown building. As such it’s nothing too original or groundbreaking, but then many of my favorite stalk-and-slash flicks can fall into that category. So just like those films, this movie will sink or swim on a few things: how good and memorable the kills are, do the victims being terrified seem like real people and are not complete douchebags so we actually care what happens to them (something so many modern horror films forget to do), and most importantly: how cool, scary, original, and badass the killer is. So how does Terrifier stack up?

Surprisingly well considering the origin of the killer clown. It must be said right at the start that this is a very bloody and gory movie. The fact that writer/director Damien Leone made his bones as a makeup special effects guy kind of explains why. If you’re not squeamish, and especially if you’re a gorehound like me, you will get a lot out of this movie. A highlight, or a warning, of what to expect is when a woman is hung upside-down by her feet, legs spread, and then Art takes a hacksaw and…well I’ll leave you to discover that for yourself, but suffice to say, very little is left to the imagination. So that’s one box checked.

The two main actresses who have the lion’s share of time on screen, Jenna Kanell and Catherine Corcoran, are both easy on the eyes and come off as silly, funny girls looking for a good time. Sometimes they act a bit loud and brash, perhaps even bordering on trashy, but you get the feeling that at their hearts both are good kids and they really care about each other. There are a handful of other actors in supporting roles and the easy, almost expected thing to have done would be to make these characters stereotypical uncaring a**holes. You know, what you see in every horror movie set in the “big city,” but thankfully here they’re played as real people who actually…gasp…want to help others. So yeah, I liked nearly everyone in here so that’s another box checked.

Finally it comes to the killer, what makes or breaks many a horror movie. While I really didn’t care for Art the Clown in All Hallows’ Eve, I think he’s fantastic here. As a killer clown he has to be both over-the-top “funny” and scary as hell, and he does both very well. He never speaks, and unlike physically imposing silent killers like Jason and Michael, actor David Howard Thornton sells his performance with body language, facial expressions, and truly great comedic (and horrific) timing. Of all the elements needed, Art is the one that could have sunk this slasher, but he is easily the highlight in this movie. So yep, one big check mark here.

Let’s get to the extras that Epic gave us for this new Blu-ray/DVD combo pack. First there is an audio commentary with writer/director Damien Leone and Art the Clown himself, David Howard Thornton. There is a behind-the-scenes featurette that runs 20 minutes, a 10-minute interview with lead actress Jenna Kanell, and a short collection of deleted scenes. There is a time lapse showing actor David and all the makeup used to make him into Art, a still gallery, a red band trailer, a more family-friendly green band trailer, and a collection of other trailers from Dread Central Presents. So a pretty good collection of special features for this little independent movie.

Terrifier was a nice surprise for me. I initially wrote it off but I ended up really liking it more than I ever thought I would. If you liked All Hallows’ Eve then I suspect you will love this movie. If you never saw that anthology or actually didn’t like it at all, I would still say give this one a shot, you’ll probably end up liking it. I did. So consider this one recommended.