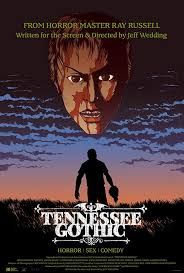 The movie barely begins when we’re dragged into a squirm-inducing rape-scene-turned-revenge bludgeoning. Then, our battered victim Sylvia (Jackie Kelly) is rescued by widowed farmer Paw (Victor Hollingsworth). With more heart than brains, Paw takes the unconscious girl back to his farm to care for her with the help of his equally dim-witted teenaged son, Caleb (William Ryan Watson). Meanwhile, some angry dude in suspiciously clean overalls is hunting down the orphaned girl, hellbent on avenging his brother’s death.

Grateful for their help, our sexy damsel in distress soon applies her feminine touch in more ways than one. Everything is peachy on the farm for a while. Even the local preacher tolerates Sylvia staying there so long as he gets to “counsel” her on the regular. And by counseling, I mean plowing the holy hell out of her which everyone else seems to be doing. By the time Sylvia announces she’s pregnant, the mental and physical toll of the men she’s afflicted is so far gone, they can’t be bothered to back out now.

The preacher (Wynn Reicher), who adds comedic gold to every scene, agrees to marry off the new parents lest they be the shame of the town. Problem is, who’s the daddy? Only an old-fashioned game of catch the greased pig will decide. With all the livestock mysteriously dead, Sylvia fills in as the greased-up pig – Go girl power! – and the preacher agrees to marry the lucky couple, underaged laws be damned.

All the sex, shame, and shenanigans lead to a final showdown where Watson gives a gut-wrenching performance portraying all the anguish and heartache a tortured soul can bare as Caleb’s worst fears collide with a reality he can no longer ignore.

Buy the Blu-ray and other merchandise HERE!