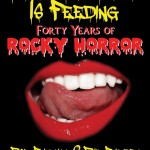 Stephen James Walker and David J Howe, editorial directors at Telos Publishing Ltd, have acquired world rights to a new book celebrating 40 years of the phenomenon that is The Rocky Horror Show.

STILL THE BEAST IS FEEDING is written by two stalwart fans of Richard O’Brien’s classic stage show, Rob Bagnall and Phil Barden, and the book promises to chronicle the extraordinary history, continued evolution and enduring legacy of this immortal tale of a sex-crazed transvestite scientist, extra-terrestrial subterfuge, corruption of the innocent and the creation of life. Incorporating a wealth of archival material, personal memories and new interviews with contributors and participants from every era of Rocky Horror history, the authors explore the show’s origins and influences; the creation of the original London stage production; the numerous national and international revivals; the making of the movie; and the fanatical fishnet following which continues to define the Rocky Horrorexperience.

‘The stage show is a theatrical phenomenon, and the movie adaptation a cult classic,’ commented Walker,  ‘and we at Telos Publishing are proud to add this title to our roster. We are known for our books on cult television and film, and this seems like a logical subject for us to be covering.’

The book will be published in April 2013, tying in with the national tour of the show which is already underway.