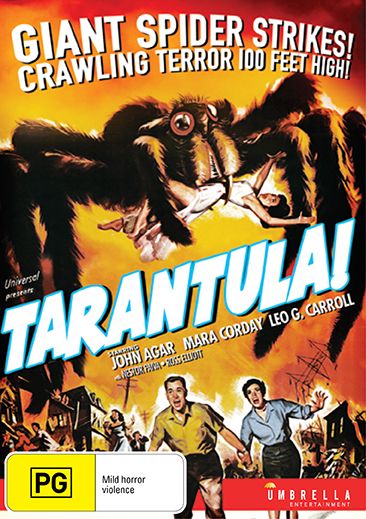 I love big bug movies. They’re not really frightening, but there is a certain kind of charm to them that I just eat up with a spoon. Maybe it’s because I am old enough to have experienced the Saturday afternoon creature features on UHF as a kid and these gems from the 1950s were a staple on those shows. So to say that I grew up watching these and that they helped make me the man I am today would not be an understatement. This fun flick about a huge, hairy spider going on a rampage was one of the first big bug movies and it’s still one of the best, and I am thrilled to death that it’s out on a new DVD from the Umbrella Entertainment form Australia. And yes, with all of their releases, it can be watched here in North America, but should you? Well, check your boots before you put them on, get a big can of Raid, and let’s find out.

In the Arizona desert, science is doing science things with growth hormones in the hopes of increasing the world’s food supply. So good on them for noble justification, but in the 1950s, when man meddled around with SCIENCE! then bad things were soon to follow. In this case a cute little tarantula suddenly turns not so little anymore and goes on a murderous walkabout through the sandy landscape. A local doctor and a dead scientist’s daughter (because girls can’t be scientists, silly) come together and begin to follow the trail of a strange disease which leads to dead cows and finally to the big bug, his own bad self. Only science and good old American military might combined will have any chance to bring this bad bug down. Oh, and keep an eye peeled for a young Clint Eastwood as a jet pilot in one of his earliest cinematic roles.

On to the extras on this new DVD of this classic from Umbrella Entertainment. And we’re done. Yes, sadly this disc is as barebones as they come. Hell, it doesn’t even have a menu. Now I know getting some special features for a movie that’s over 60 years old is a tall order, but something could have been done and I feel something should have been done for this. That being said, the transfer looks very good and just having this film on a good-looking disc and not a cheaply thrown together, horrible looking multipack is good for me.