Tales from the Crust – Book Review 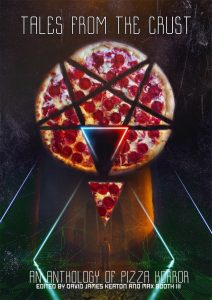 At some point in our more mindless musings, we have all said it: “Pizza is like sex: even when it’s bad it’s good.” Who knew that horror stories about pizza fit the same axiom? There is not a bad slice within Tales from the Crust. There has been some chatter regarding this anthology, and it definitely lives up to the hype. As gruesome as the collection is (and I need to provide a warning that many of the stories are not for the squeamish), I was constantly reminded that this was an unfortunate time to begin my low-carb diet, as the stories not only left me craving the next one, they also had me hunkering for a mushroom, hot pepper, and eggplant pie. Even the introduction, by David James Keaton and Steve Gillies, was engaging as it read as a story unto itself. The offerings were wisely selected with some stories focusing on pizza as the main dish, while in others the pizza is a tasty side.

I enjoyed the entire collection, yet a few stories stood out:

“The Vegan Wendigo” by Cody Goodfellow: The first offering in the anthology contains clever writing and a morbid twist on vegan diets.

“When the Moon Hits Your Eye” by Jessica McHugh: If delivery man Mikey fills a special order he will get into a fraternity. Unfortunately for him, the women receiving the order are not what they seem.

“Rosemary and Time” by Craig Wallwork: This story contains the intriguing ingredients of time travel, deception, and a gun for hire who calls himself The Magician. Don’t let the mentions of physics scare you; the plot is clearly told and very engaging.

“Last Request” by Rob Hart: Cynthia becomes interested in a serial killer that she is charged with guarding. They talk of New York, Camus’s The Stranger, and pizza — which is the killer’s requested last meal. This is a metamorphosis story with Cynthia slowly coming into her own and I rooted for her the entire time.

“Elude the Snood” by Tony McMillen: We all become annoyed by company mascots, especially when they are unavoidable. Drederick Fitzgerald Snood has a special issue with a pizza mascot, that has an origin story more evil than corporate greed.

“The Blessed Hungry” by T. Fox Dunham: This story offers a different type of last meal. It is gruesome, while simultaneously captivating.

“Demons of 1994” by Izzy Lee: I really enjoyed the 1994 references to Kurt Cobain and OJ. The sweet relationship between the main characters drives the plot.

“Bad Night Below Ricky’s” by Nick Kolakowski: A conspiracy theorist meets up with a fellow troll. Together, they uncover an ancient darkness in an ordinary pizza place.

“Mickey and the Pizza Girls” by Sheri White: This story has a great take on the classic Toni Basil song “Mickey.” “The Event” has occurred and created mutants, including cheerleaders who are stuck working to the tune of that earworm. Witty writing and a witty ending.

“The Black Cheese” by Matthew M. Bartlett: Austin asks Marielle to bring home a frozen pizza, but it must be one specific brand. Since no one really wants frozen pizza, you know this is not going to end well.

“Watch Them Eat” by Andrew Hilbert: A delivery boy is obsessed with the Waltons, his regular customers. This story offers a dark examination of the role of food in family life as well as a glimpse into the mind of a truly delusional young man.

“Pizza_Gal_666” by Emma Alice Johnson: Sarah meets Vannie on a dating app. Vannie is almost too good to be true, and her former social circle is far more powerful than Sarah wants to believe.

“By the Slice” by Nancy Brewka-Clark: After William is released from prison, he takes an entrepreneurial interest in Ski Boys pizza. When the walls close in (figuratively), William behaves as a man with nothing to lose.

“Leftovers” by Betty Rocksteady: This is an abstract story about grief and the desire to hang onto grief. The emotions are relatable, and the writing is lovely.

Again, the collection offers descriptive violence and explicit sexual situations, so if you prefer your pizza without any spices, this read may not be for you. Those who like a lot of diverse toppings (heartburn be damned!), I urge you to read Tales from the Crust; you will not be disappointed!