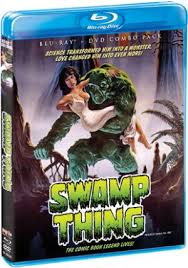 Even long before comic book movies made billions and ruled (and some say ruined) the theaters, they were still being made, only less frequently and far less well. They were seen as properties just for kids, nothing to be taken seriously. So to filmmakers any old dreck pushed out the door would suffice. They were quick and dirty cash grabs and nothing more. It truly was a dark time for lovers of comic books who wished to see their favorite heroes on the silver screen. Sadly things didn’t change much even when a talented director of genre films decided to adapt one of the weirdest, darkest, and even most horrific heroes in DC’s line up. That director was Wes Craven, the dark hero was Swamp Thing, and that movie came out in 1982.

Now I won’t say that Swamp Thing is a good movie, because it’s not. The effects look cheap, the dialog is stilted, the plot is middling (Beauty and the Beast set in the swamp for the most part), most of the actors seem to be phoning it in, and the direction is on autopilot. But with all that said, Swamp Thing sure is a lot of fun. So much so that it has spawned a cult following for itself over the years. So for all the loyal Swamp Thing fans out there, this new Blu-ray from Scream Factory is for you. But then you already knew that. The real question is, is it for anyone else? Well grab your hip waders and industrial strength mosquito spray, we’re going into the swamp.

Swamp Thing is about a woman named Cable (no really, her first name is Alice, but everyone calls her by her last name) going down to the swamp to help eccentric genius Dr. Holland, who is looking to splice flora and fauna on the genetic level. The lovely lady assistant is played by Adrienne Barbeau and the scientist is Ray Wise in a very early starring role for him. Into his happy, albeit humid, garden a viper slithers in the form of an evil and rival scientist named Dr. Arcane! Hey what do you want? After all it is based off of a comic book. Anyway, before you can say “careful with that green glowing super juice” some mercenaries working for Arcane raid Dr. Holland’s lab, kill some folks, and cause the good doctor to have a fiery accident that turns him into the titular thing from the swamp. Cable escapes the massacre with Holland’s notebook, only to be chased for the rest of the movie through the swamps by Arcane’s thugs for that very book of super science secrets. Along the way she makes friends with a young but savvy teenager and Swamp Thing shows up multiple times to save her again and again. And basically, that’s the movie. Sure there is a bit at the end where Swampy must battle another mutant in a rubber suit smack down event, but it is rather anticlimactic and just sort of ho-hum to sit through.

Now I don’t mean to say that everything is bad in this movie. Craven embraced the comic book ascetic with his use of color and even his dissolves/wipes. The music is good, if sometimes out of place. It’s done by Harry Manfredini, and to me everything he does sounds like Friday the 13th.  This movie is no exception. Perhaps this film’s greatest strength is that it’s silly, seems to know it, and so it runs with it. It seems to be having fun and that fun is infectious. I’ve never been a huge fan of this movie due to its limitations, but I also do enjoy it in spite of them.

Whether or not you are part of the cult that digs this flick, it is undeniable that Scream Factory has once again put out a hell of a Blu-ray/DVD set. That’s right, this is a two-for-one combo pack. So yay for that for those who have yet come on over to the Blu-ray side. However I pity those folks because this movie looks amazing in HD, but that has become par for the course for anything released by Scream Factory. In addition to that, you will find two audio commentaries here. One by writer/director Craven, and the other by makeup special effects artist William Munns. There is a brand new 17 minute interview with actress Adrienne Barbeau called “Tales from the Swamp” that was both interesting and entertaining. “Hey Jude” is an interview with Reggie Batts, who was Adrienne’s teenage sidekick in the movie that runs just over 14 minutes. There is 13 minute interview with comic book writer Len Wein, who created the character of Swamp Thing for DC comics. Lastly there are a trailer and a photo gallery round out the extras.

Swamp Thing is not for everyone, but for those that love it, this is a great Blu-ray edition. If you’ve never seen, it then you might want to give it a shot if you’re a fan of flicks that could be called campy or perhaps even so bad their good. So consider it a high to moderate recommendation for those two groups. If that’s not you, then maybe pass on this one.