SUSPIRIA, The Mother of All Italian Horror Films, Comes to 4K UHD from Synapse Films

On November 19th, Synapse Films is breaking new ground by entering the 4K UHD market as an independent label. Dario Argento’s hallucinatory masterpiece SUSPIRIA will be presented in a two-disc UHD+Blu-ray package that blows every previous release of the movie out of the water. Synapse has gone back to the 4K scans that served as the source for their widely acclaimed Blu-ray presentation of the film and started from scratch in order to fully take advantage of the opportunities created by UHD. Synapse President Don May, Jr. says, “We went back to the original 4K files and did a new color correction that took full advantage of the UHD format’s expanded color and high dynamic range capabilities.” You might have seen SUSPIRIA in the past, but now you can experience it in a whole new way!

Jessica Harper (PHANTOM OF THE PARADISE, PENNIES FROM HEAVEN) stars in this frightening tale of a young student who uncovers dark and horrific secrets within the walls of a famous German dance academy. What spirals out from that simple premise is one of the most powerful and hallucinatory nightmares ever captured on celluloid!

RELEASE WILL INCLUDE A 1080p BLU-RAY DISC OF SPECIAL FEATURES! 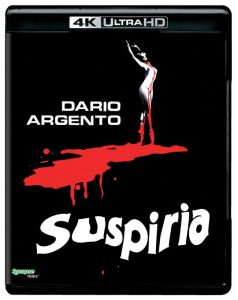 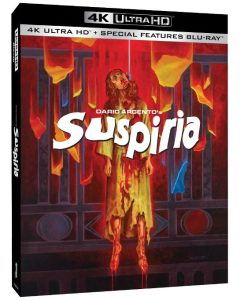