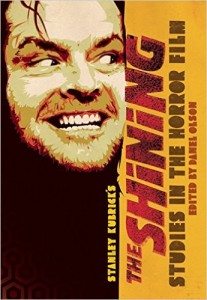 The Shining. Two deceptively simple words. In the horror word, those two little words carry such tremendous weight. First, there is King. Yes, that King. The King. Then there is Kubrick. Yes, that Kubrick. The Kubrick. Two of the greatest forces in their respective fields met over…The Shining. Something was unleashed in that moment, and Danel Olson is one in a long line of thinkers who have attempted to understand just what it was that happened.

The Shining is, of course, a classic horror novel. The story is one of King’s most famous. There’s the creepy hotel and the even more creepy little boy. Murder, ghosts, shadows, and the finale with the monster rising from the fire are all in there. King fans rank The Shining as one of his best.

The Shining is also a classic film. Like the novel, the film has that creepy hotel and even more creepy little boy. Only the film is not the novel by any means. Kubrick took King’s classic monster tale, and did things to it. Remove the burning hotel from an exploded boiler and add a bizarre long shot of a photograph decades old. Remove the moving topiary and add a haunting, snowbound maze. According to some fans, remove King and add Kubrick.

There is the book and then there is the movie. For me, they are entirely different animals. Olson’s treatment of The Shining takes this approach as well. There are essays and interviews on Kubrick, King, adaptations of novels, film study, and scholarly examinations of the story itself. Olson presents a well-developed collection here. John Baxter’s opening essay, “Kubrick in Hell,” examines the role of the documentary about the film in our understanding of the film itself. It’s an excellent opening to this diverse monograph. Tony Magistrale’s essay, “Sutured Time: History and Kubrick’s The Shining,” was, for me, the stand out essay. Magistrale analyzes the conflict between King and Kubrick in the interpretation of the film. Magistrale argues that Kubrick’s story is about the failure of the masculine narrative as defined by the mid-1970s culture. Kubrick had another vision for the origins of evil. Unlike King, who often centers his evil outward, Kubrick chose an internal origin fueled by an external evil. Humanity is, through Jack Torrance, an agent in his own downfall. Bernice Murphy’s essay, “You Mean They Ate Each Other Up? The Shining as Windigo Story,” presents an interesting analysis within the Native American legends framework. Her work was another highlight of the essay portion.

The second half of the collection features a large number of interviews from the cast and others involved in the film. Some are new and some are reprints. The list is impressive and covers everyone from Kubrick himself to the delightfully creepy Grady girls (also known as Lisa and Louise Burns). The crew discusses lighting, the script, the casting, and other technical elements of this eerie masterpiece. The second half is a wonderful cross-section of  “behind-the-scenes” and intricate insider details.

The Shining. King. Kubrick. Cerebral horror. Monster horror. Jack Nicholson. Shelley Duvall. Redrum. Hedge mazes. Both the film and the book have left us with some of the most indelible horror of the post-war era. This was King’s first real breakthrough bestseller. Kubrick was already the godfather of cerebral bizarreness. After viewing Kubrick’s seminal film 2001: A Space Odyssey, one cardinal remarked that it was the closest an atheist had ever gotten to God. Kubrick had a vision and King had a story. The rest is history. Does Danel Olson get to the heart of The Shining? Does this collection “explain” its enduring magic? No, but then again, I doubt any writer could capture that elusive Loch Ness Monster. Olson instead opens doors. This collection will make you think about that one scene or that one line just a bit differently. The writers in this monograph give us new angles, new images, and new possibilities to consider. What does it all mean? We may never know, but keep reading. A shadow or two might just shimmer at the end of that long corridor. Ghosts of the long dead may wander by for a nightcap. If you are really lucky, Kubrick himself might run a cold chill down your spine in the wee hours. Recommended reading for any fan of this classic book and film.