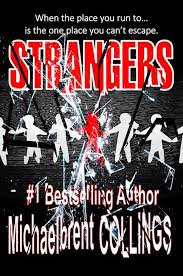 Recently I reviewed my son Michaelbrent’s novel Darkbound, easily among the goriest and most intense horror I have ever read.

Now I have a chance to talk for a few moments about his latest book, a quintessentially creepy work called, quite appropriately, Strangers. It hasn’t the gore of Darkbound but it continues that novel’s concerns for appearances versus reality, public faces versus private, and openness versus secrecy. And it does so in the single most horrific place possible.

In the “Prologue,” readers are brought face to face with a terrible crime scene, one that provides far more questions than it does answers. There is the broken window-glass that appears to have fallen from the frames unnaturally and impossibly. There are the small holes bored around the windows and doors, even those on the second floor. There is the small bit of heavy cloth that none of the police personnel can identify. There are the piles of wood—once expensive furniture, now little more than kindling—that are scattered in every room of the house.

And there are more crucial questions, dealing with the rooms whose walls are covered floor to ceiling with blood; with bodies stripped of all humanity…and identity; of the speaking corpse found in one room that, in its madness, can repeat only the same sentence again and again.

Questions, but no answers.

“Chapter 1” introduces what seems to be a typical upper-middle-class or lower upper-class family, wealthy enough to afford a secluded mini-mansion in an exclusive community where houses are surrounded by high security walls, neighbors know little if anything about other neighbors, and families can live insular lives, rarely interacting with the rest of society.

And therein lies the ultimate problem.

When the four members of the family—hard-working father, beautiful and passionate (although recently a bit distant) mother, perfect Princess of a daughter, and rosy-cheeked and handsome son—awaken following a difficult evening meal of Chinese take-out, they discover that the impossible, the unthinkable has happened

They are prisoners, trapped in their own house, unable to use telephones or computers to contact the outside world…and some unknown and unfathomably cruel enemy is playing with them, toying with them, eventually killing them one by one.

With this premise, Collings draws us into a world of madness and insanity, of unimaginable malice, of brutality that stains every room, every nook and cranny of the house with blood. The family is alone as never before, forced to depend solely upon each other…and then the revelations begin of secrets to awful to be told. Father, Mother, daughter, son—each holds the key to destruction or restoration, if they can only identify it and understand it in time.

Strangers, a thorough re-inventing of Collings’ earlier novella, The Stranger Within, is not for the faint hearted. Nor is it for those expecting some kind of fairy-tale ending to a story that is, from its opening words, horrific in the extreme. And what makes it most frightening is not so much the monster, which in this case is a human bereft of all humanity, but the revelation of what lies beneath the pretense so carefully constructed in the first chapter and revealed in all of its perversity and terror in the last.

Careful readers will recognize the influence of Dean R. Koontz and Stephen King, the latter from the abrupt echoes of one of his strangest and most memorable characters. But the rest is definitely all Collings as his many readers have come to know him. There are twists aplenty, characters whose depths of darkness and isolation astound even themselves, moments of spine-tingling, edge-of-the-chair suspense, sudden appearances and equally sudden disappearances—all designed to make readers wonder who, precisely, are the Strangers.