Steve Niles to Take Over Army of Darkness Comic Book 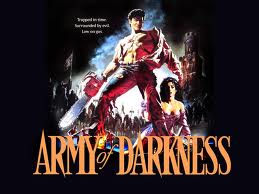 I love Army of Darkness, though I must confess to being somewhat less familiar with the comic book.  That being said, the addition of Steve Niles can’t be a bad thing.  I look forward to seeing how this develops.

Dynamite is proud to announce that their flagship comic book title, Army of Darkness, will receive a complete overhaul and a new ongoing series as imagined by Steve Niles, acclaimed author of 30 Days of Night and Batman: Gotham County Line.  A horror/action series with dark comedic overtones, the newly-titled Ash and the Army of Darkness continues the time-traveling, demon-fighting adventures of Ash Williams, the smart-mouthed hero of the 1992 cult-favorite film of the same name.

Comic book writer and novelist Steve Niles is credited as being an instrumental force in bringing horror comics back to prominence in recent years.  Perhaps his best-known work is 30 Days of Night, a best-selling vampire series co-created with innovative illustrator Ben Templesmith and adapted into a feature film.  His impressive list of credits include such licensed and creator-owned tales of terror as I Am Legend, Hellspawn, Chin Music, Simon Dark, The X-Files, Remains, Criminal Macabre, and 28 Days Later.

“I’m very excited to be working with Dynamite and thrilled to be working on Ash and the Army of Darkness,” adds Niles. “The film is one of my favorites and I think we have a really fresh, exciting take for Ash’s continuing adventures fighting the dead.  Dynamite has been expanding their line and have an impressive array of comic creators working with them now.  I’m looking forward to joining the team.”