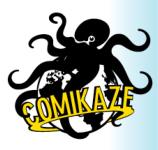 Like Stan Lee, Cassandra Peterson was a Guest of Honor at 2011’s inaugural Comikaze Expo. Impressed by Comikaze’s success, and Stan Lee’s role, Peterson wanted to be involved. The Elvira creator is taking a very active position in the planning of the pop-culture expo. Peterson and Stan Lee’s Comikaze Expo plan on creating interactive content unlike any other convention.

“Elvira is part of our pop culture history. Not only is Cassandra Peterson a pretty face, but she is also brings so much to the table. She’s one of the most brilliant businesswomen of our time, and has some fantastic ideas. I am so proud to call her our partner. I like to think of her as Mistress of the Board,” said Stan Lee’s Comikaze CEO Regina Carpinelli.

Peterson and the Stan Lee’s Comikaze team are launching an interactive webseries & film festival for the show, taking place September 15-16th, called Elvira’s Horror Hunt. Aspiring and amateur filmmakers will submit their videos to Comikaze. A team of judges will evaluate them, and the top 10 will be picked – or panned by Elvira and her co-host, Peaches Christ, on the hilarious new web series, Horror Hunt. A final winner will be chosen and flown out to LA. The winner will receive a red carpet premier at the historic Vista Theater, as well as an official screening at Stan Lee’s Comikaze Expo. They will also be featured as a guest at Comikaze.

Tickets are now available through pre-sale at $15. Stan Lee’s Comikaze Expo presented by POW! is also offering a unique ticket that enlists fans into the Stan Lee’s Comikaze Army. This interactive ticket includes a weekend pass, armband, dog tag, military ID for discounts on merchandise and select vendors as well as collector’s edition posters (children under 12 are free) through the website Comikaze Expo.

Comikaze Expo is the largest multimedia pop culture convention in Los Angeles. The brainchild of Southern Californian Regina Carpinelli and her siblings, this unique event brings together the best in comics, gaming, horror, sci-fi, fantasy, anime and all other cult programming.

Comikaze takes place September 15-16, 2012 at the Los Angeles Convention Center, and offers a slate of innovative programming, panels, contests and other activities that provide fans access to their favorite artists and creators in this adventure-packed weekend.