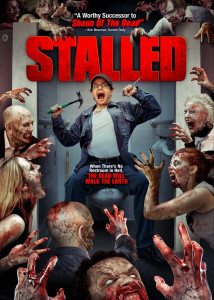 Zomedies (zombie comedies) seem to be the hottest thing going right now, with the UK looking to lead the way in quality flicks about laughing at the undead. First there was the amazing Shaun of the Dead, then the very good Cockneys vs. Zombies, and now, Stalled. Is this latest UK zomedy another winner or just a wiener? Well grab your favorite bathroom reading material and make sure you have plenty of toilet paper, we’re about to get Stalled.

Just in case the title of this movie, or that last sentence, didn’t give you a clue, the vast majority of this film take place in a single room. In this case, it’s the women’s restroom. Moreover, most of the time the camera never leaves a single bathroom stall. Now do you get the title? Ha, jokes!

As for the story, it’s pretty simple. A maintenance man named W.C. (those in America might not get that reference) is trapped in the ladies’ room one night during an office Christmas party that just so happens to take place on the start of the zombie apocalypse. The rest of the move is W.C.’s comedic attempts to escape his confines and the hungry dead. For good measure, there is another, non-dead character for W.C. to play off of, who is largely left unseen and just a voice in the darkness, but is nevertheless an very effective character in her own right.

This is a very narrowly focused zombie movie made on a tiny budget, but that’s not necessarily a bad thing. Not if the movie is made with skill and charm, as it is here. The plot is tightly focused on W.C. for the most part. Maybe that’s because the lead actor was also the writer, so he designed it from the ground up as a showpiece for him. Usually when that’s the case, the end result is a self-indulgent snooze-fest. No so here. Writer/actor Dan Palmer easily carries the movie on his shoulders, pulling off what is essentially a one man show, and never once does it become a tedious chore to sit through. He is also laugh out loud funny with great comedic timing, something that a lot of comedies seem to forget.

Now this movie is only available on DVD on this side of the Atlantic from Phase 4 Films, but don’t let that stop you from getting it, all you Blu-ray snobs out there. The movie looks very good and it comes with an impressive collection of extras to sweeten the deal. There are two audio commentaries on this disc, one with director Christian James, writer/star Dan Palmer, and actor Rick Edwards and the other with producers Dan Pickering and Richard Kerrigan. There is a behind the scenes feature that runs 55 minutes that had a lot of on set and raw footage, and two scenes to story board comparisons. This means this humble little DVD has more extras and goodies on it then many larger Blu-ray discs. Way to go, Stalled.

Stalled is a fine, fun, and funny film made with tons of style and charm. If you’re sick and tired of the overuse of zombies these days, well I really can’t blame you there, but there are still gems of entertainment to be had from cavorting corpses if you look hard enough. This movie is one such jewel. Consider it highly recommended.