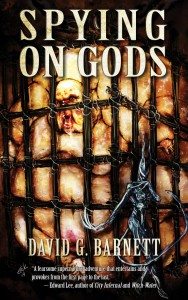 Many of you know David G. Barnett as a publisher, helming the legendary Necro Publications since 1993. Fewer of you might know him as a writer, and I hope this review will raise your awareness.

In 2003, Barnett collaborated with Edward Lee on a chapbook, The Baby, and had short fiction in the first three Shivers anthologies from CD Publications. Dead Souls, his collected stories, was released in 2004, and a new series has debuted with Tales of the Fallen: Book 1—Awakenings. Even a cursory look at Necro’s website will show you that Barnett isn’t sitting around staring at the wall. Given the time he must devote to Necro (he’s also a DJ) and its numerous — ever-growing — offerings, I’m thinking he’s discovered some way to bypass sleep.

With Spying On Gods, Barnett explores (and clearly enjoys doing so) diabolic ritualism, collective superstition as kindling for occult manifestations, and graphic horror. This novella brought to mind the seventies subgenre of “folk horror” movies — The Blood on Satan’s Claw being a good example — produced in England (though Spying On Gods would require an X-rating).

Yamak Lisconn, charged by rumors from a Vandere gypsy, spies on a village fertility ritual that quickly escalates into a brutal orgy of sacrifice and conjuration. Even the villagers don’t linger for the final stage, but Yamak stays hidden in a tree until terror causes a fall — and compound fracture. Luckily he is found and cared for by mender Mirika in her father’s home. The villagers become aware of this, none too pleased that Yamak’s interruption (through discovery by a certain entity) of their vital ritual brought the Taint onto crops and land. Soon, Harton Kinluhn, friend of Mirika’s father and a sort of village protector desiring peace and fertility, visits them and feverish Yamak. Meanwhile, a tavern meeting has young Lamar loudly trying to induce the villagers to offer Yamak as a sacrifice (forgoing the usual Lottery system heretofore providing…never mind). And there’s a Hitchcockian McGuffin: Harton has a secret tormenting him with guilt. Egging on Lamar’s rabble-rousing in order to expose the youth’s idiocy, Harton comes close to spilling his own beans — Lamar catches this, recommending Harton too as a sacrifice.

Escaping to a cave where Mirika and her father Victor hide themselves and scapegoat Yamak, blackness sniffs for, and finds, Harton and Yamak — demanding payment of their spiritual debt.

Here, matters turn (to an extent) away from reader expectations, and so-called demonic forces are revealed as more complex — even necessary to the world’s balance. This, though, doesn’t render them empathetic to the human condition. Barnett paints a final conflict with Boschian color and explicit physicality. Blood is required; blood is shed.

Do not spy on the gods.