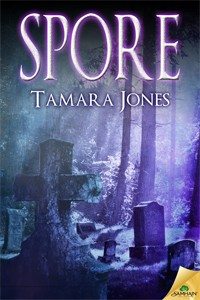 Tamara Jones’s new novel Spore is, at first glance, a pretty standard looking zombie novel. When the reader gets into the story, which takes no time at all, it becomes clear that this isn’t necessarily a zombie novel at all. Sure, there are people rising from the dead, but not in ways that populate so many novels in the subgenre. Jones uses the zombie and pandemic ideas of horror to create something unique, a novel of pure horror that stays away from cliche and never let’s up on the suspense until the end.

Spore succeeds mainly on the author’s commitment to keeping the story about the small town and the few main characters that the reader really gets to know. Stories like this, dealing with the undead or spreading infection, tend to have a sprawling plot and cast of characters that may come together at the novel’s end. That’s not the case here, as the story never loses its focus on just a few characters in a small town. This allows for the realistic human element to shine through the fantastic elements.

The lead character is comic book creator and artist Sean Casey, a good man working to have a happy life and escape a troubled past. The tale opens as a number of naked people walk through the treeline at the end of Sean’s property, likely having come from the cemetery on the far side of the trees. It takes very little time for it to become clear that these are not run-of-the-mill zombies. Actually, they may not be zombies at all. These “Pine People,” or “Spores” as they will come to be known, are fully functional, aware people. Their shared trait is a lack of memory, some for weeks, some months and some for decades. They can remember everything about their lives up to a point and then they find themselves naked at Sean’s house.

Sean’s reaction is unexpected and perfect, and sets the tone for the remainder of the novel. He talks to the Spores, realizes that they are people like himself and he helps them. He invites them into his home to cover up and try to contact family as he calls the local police for help. The police arrive, one of them a friend of Sean’s, and they take the Spores to the hospital where the staff tries to figure out what is causing their strange circumstance.

This is the strength of the book – its reliance on the characters and what the human reaction to such a situation would be. In a genre where the focus is often on the situation, the cause and result of the horror and the gore, Tamara Jones has written a book that is about the people. It never comes at the expense of the gore and situation either, as both are present and well done. In focusing the story on the micro instead of the macro, Spore elevates itself to the level of a superior novel.