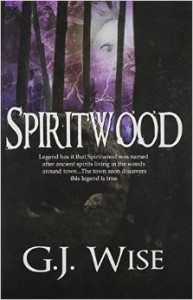 G.J. Wise’s Spiritwood is a novel of small town horror driven by centuries-old American Indian lore. The story is typical of the subgenre of rural community horror but definitely tends toward a contemporary and extreme feel. There are some excellent characters that the reader will find themselves invested in, heroes to root for and villains to rail against. The plot has its ups and downs and not all of the threads have the same compelling pace, but the fate of the players is enough to keep one reading through to the end.

The town of Spiritwood, Wisconsin dates back many generations to a time when it was populated by Native Americans, the last of whom were the tribe of leader Red Eagle. A massacre of his people leaves them interred in a burial mound in the dense forest outside of the town proper, a burial mound that will retain a strong supernatural energy to the present day, when the novel is set.

Few residents know the mound exists, and only one, the elderly Henry Crowdog, knows what it actually is. The grave is often littered with the bones of small animals that have ventured onto it, a sign of its destructive power. The biggest illustration of the burial mound’s dark power comes when Henry, a young man some 50 years before the book’s main story, finds it, passes through the circle of trees around it and sits atop it. Unable to stop himself, Henry inflicts wounds upon his own body, wounds that were not fatal only through luck and Henry’s personal resolve. After his recovery, Henry takes it upon himself to guard the mound to make sure nobody breaks the circle of trees surrounding it or violates it otherwise.

The main conflict of the novel begins when artist and sculptor Jed Guinness buys the rural home and property in which the burial mound is located. Jed has a special gift that allows him to see things, people, shapes in wood, and it’s that ability that allows him to sculpt, or carve, with such precision. He doesn’t cut figures into the wood, he simply cuts away what wood is in the way of the shapes that are already there. His new neighbor, young B.J., is the only other person who can see the things in the wood like Jed and it’s B.J. that will connect Jed to Henry and drive the narrative through increasing violence to its ultimate conclusion.

The characters are the greatest success of the book with the supporting players being as interesting, if not more so, than the lead players. The plotting of the book is a bit uneven, with the stories of certain characters working well, like Henry, B.J. and the main antagonist Bruce moving along at a quick pace. Other characters, though well realized, don’t have strong plot threads that lead to occasional slowdowns. The book’s only real failing is with a series of dreams and visions that happen at about the midway point in the novel. The dreams go on entirely too long and nothing of substance to the story. If the reader can get through them, though, the story picks up steam again through increasing madness and violence to a strong conclusion.