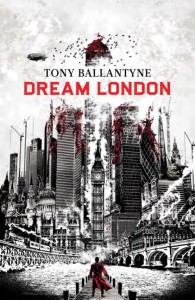 “A real feat of the imagination, this is a really exceptional book, unlike anything I’ve ever read before” – Chris Beckett, Arthur C. Clarke Award winner

Fans of China Miéville, Ben Aaronovitch and Neil Gaiman will love the new novel by Tony Ballantyne, which features cover art and book design by the celebrated artist Joey Hi-Fi.

In Dream London, Ballantyne has created a world that may at first seem familiar but where the recognisable towers of Britain’s capital grow taller, its parks hide themselves away and its streets form themselves into strange new patterns. There are people sailing in from new lands down the river, new criminals emerging in the East End and a path spiralling down to another world.

Captain Jim Wedderburn has looks, style and courage by the bucketful. He’s adored by women, respected by men and feared by his enemies. He’s the man to find out who has twisted London into this strange new world, and he knows it. Everyone is changing, no one is who they seem to be.

A spell-binding modern fantasy that blends the familiar with the phantasmagorical in a kaleidoscope of adventure. Visit Tony Ballantyne’s Dream London and you’ll not want to wake up.

Tony Ballantyne is the author of Twisted Metal, Blood and Iron and the Recursion series. He has also written many short stories. Tony grew up in County Durham in the North East of England. He studied Maths at Manchester University before moving to London where he taught Maths and IT. His first SF sale was ‘The Sixth VNM’ which appeared in Interzone 138. Since then he has had short stories appear in magazines and anthologies worldwide. He has also written romantic fiction and satirical pieces for various magazines such as Private Eye. Recursion, his first novel, was published by Tor UK in 2004. He has been nominated for the BSFA and Philip K Dick awards. He now lives in Oldham with his wife and two children. His hobbies are playing the piano, accordion and cornet. He also enjoys walking and cycling. www.tonyballantyne.com