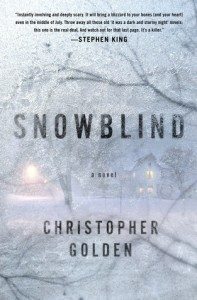 Twelve years before, the small New England town of Conventry experienced a snow storm that left dozens of people dead.  These individuals died, not because of the extreme weather conditions, but by what was inside the snow…creatures that flew in the wind and kamikazed unsuspecting individuals by grabbing them, lifting them high into the sky, and then dropping them to their deaths.  Some of the people, however, disappeared into the snow, never to be seen again.

Then, twelve years later, another snow storm approaches the town.  Those who lost a loved one before must now fight for their lives, because the creatures are back.  But even more astounding, the people who disappeared into the snow over a decade before are now back, hoping to escape the things that are after them.

What Christopher Golden has done with the horror genre is to create a new, exciting, and utterly terrifying ice creature that comes during a heavy snow and kills those it can get its hands on.  Suffice it to say, that the beginning of Snowblind is a frenzy of death as is the ending.  I wish the novel had been longer with the last third running an extra fifty-to-sixty pages.  Though the middle was good, it seemed to drag in parts, especially with regards to the robbery sequence.  A longer ending would have balanced this out.

One thing that ranks Mr. Golden with the top writers of today is his sheer brilliance with the written word.  His style of writing is simple; yet, poignant.  It would appear to be easy to emulate, but is actually quite difficult and takes years to master.  This is a gifted writer at work.  He should already be on The New York Times Top 10 Bestseller List.  He’s that good!

Great story development, fantastic characters, and bloody frightening creatures that are the stuff nightmares are born of.  Get Snowblind and read it during the next blizzard if you can stand the branches knocking against your window at night.  Who knows…maybe it’s not the branches at all.