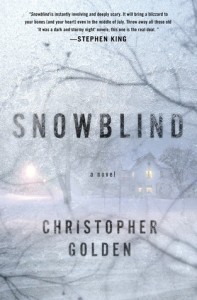 Over the years I have developed my own (very) short list of modern ghost stories that have touched me on multiple levels—thrills and chills aplenty, of course, but also deeper resonances that have kept passages, moments, images alive. They include Stephen King’s The Shining (1977) and Peter Straub’s aptly named Ghost Story (1979), both of which went far toward refurbishing a time-worn form; Orson Scott Card’s remarkable and poignant Lost Boys (1992); and more recently, Peter Dudar’s A Requiem for Dead Flies (2012). Each of these dealt to one degree or another with loss and restoration, with condemnation and redemption—twinned themes that lie at the core of many of the most powerful ghost stories.

Now I have added another book to the list, Christopher Golden’s Snowblind.

The story begins, appropriately enough, with a small Massachusetts town; a once-in-a-century blizzard that isolates both the town and the individuals within it; and something…or some things…that ride within the storm. When the blizzard finally passes, a number of people are dead; worse, the lives of the survivors are broken, ruined. For them, as for everyone in Coventry, snow ceases to suggest pristine beauty or winter wonderlands; it comes to betoken fear and horror.

Twelve years later, another storm threatens. As the precursor flurries cloak the streets, a handful of people, linked by their horrendous experiences in the previous storm, begin to share disturbing, unsettling experiences…including seeing what can only be ghosts, revenants of those who perished over a decade before.

As the cold settles in, as the snow deepens, old secrets are revealed and old scars re-opened until it gradually becomes apparent that all of the main characters are inter-connected by their losses and their needs…by the sense that something began in the earlier storm that can only be completed in the darkness and the danger of the new one.

Golden adroitly manipulates his characters as we see them from dual perspectives—what they were in the first storm and what they have become at the time of the second. He allows them to grow in unexpected ways, to develop as individuals at once flawed and hopeful. And, using the metaphor of storms and ghosts and unnamable, horrifying creatures that crave physical, psychic, and spiritual warmth, he brings the separate stories to inevitable—but at the same time surprising—conclusions.

This was one book that I nearly completed in one sitting—it is that compelling, that accomplished, that frightening.