‘Snow Over Utopia’ is Out Now from Apex Publications 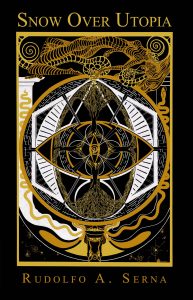 Snow Over Utopia  is a genre-bending short novel of apocalyptic fantasy, sci-fi psychedelia, and doom metal.
In an age of savage science powered by black-mass, and thrown away bio-matter leaked into an underground sea lit by the heart of the great tree, a girl named Eden loses her rare blue eyes. Escaping her fanatical and sadistic slave masters with her eyes in a jar, she runs away with a murderer named Miner. After fleeing for their lives deep within the forest, they are found by the Librarian and his daughter Delilah, and sheltered in their mountain-top sanctuary. But she cannot stop there. If Eden wants to restore her eyes, then she must go on through time and space in a necrotronic stream generated by the living computer program called Witch Mother.

While mutantoid priests in underground bunkers monitor transmissions from the great tree, Eden and Miner must face the horrors of the factories and the coliseum run by the Robot Queen in the city of Utopia. Can they make the ultimate sacrifice and complete their mission? Or will they fail in Snow Over Utopia?

Get your copy of Snow Over Utopia now!

Want to know more? Check out these early book reviews!

“Serna’s prose is beautiful and masterful. Despite the bleakness of the world, it is actually a really encouraging story about how we should just trust that nature can take care of the world.” – High Fever Books

“Serna’s writing is a whisper of the truth with hints of stark imaginations that combine to form a world in which humankind has turned robot into ruler and mutants into other powerful races.” – Paul’s Picks

“This book gets four stars because it has an intriguing premise as Serna navigates some heavy topics like racism, domination, and corruption. It’s not a typical, straight forward, “Once Upon A Time” kind of book, so take your time with it.” – Sci-Fi Scary