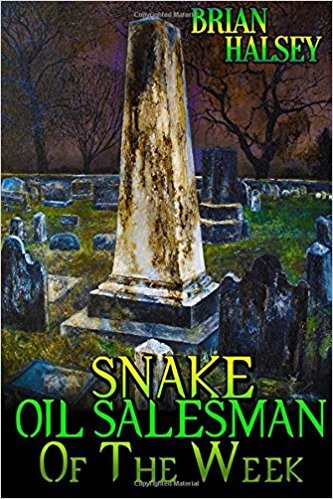 Howdy folks! It’s time for another review from yours truly, which I hope will be both informative and encourage people to read more books. I just have a quick announcement to make before we get started. To all the writers and publishers that have entrusted me with your work, I just want to say thank you! I also want to say how much I appreciate it when writers go the extra mile to sign their books and perhaps write something like, “Hope you enjoy reading this. Thanks for the review!” Awesome! That makes my day and usually earns said book a place on the “wall of fame” over my desk. BUT…When a person uses up two pages of the book to annoy me with a bunch of stuff that might have been hilarious when the writer was intoxicated, it doesn’t do a lot to endear them to me. Unfortunately, that’s what I walked into when I opened the cover of Snake Oil Salesman of the Week by Brian Halsey.

Since this novella is basically a “Brotastic” piece of weird fiction, I guess that fits right in. Snake Oil Salesman of the Week is a jumble of confusing events that manages to include the Jersey Devil, drinking, drug use, a lot of profanity, and extreme levels of Bro-ness. You really have to be totally into the last theme, otherwise a lot of the intended humor is not going to strike you as such. That’s just the facts.

The main story is that a semi-successful artist in a small town is tricked into selling his soul to the Devil. He can get his soul back in exchange for two more, but he has only a week to accomplish this feat. What sounds like an easy bit of trickery turns into a strange love story for a small town when the artist realizes that he doesn’t want to steal anyone else’s soul. Said town then backs him up in his fight against the Devil and they win. At least I think that’s what happens. With all the beer drinking, weed smoking, and magic mushroom use, things get kind of garbled.

Yes, the book is supposed to be funny. I got that. But the laughs become predictable too quickly and are aimed at a specific demographic. Soon the reader finds themselves wading through a lot of pointless activities, so much profanity it’s just stupid, and a short cameo by…Cthulu? Really Bro? With all the mysteries and hauntings of the New Jersey Pine Barrens, that’s the best you can grab?

I spent quite a few years of my life living in Lambertville, New Jersey and just over the border in Pennsylvania, so I know a fair bit about the Pine Barrens and the Jersey Devil. Not to mention the Leni Lenape Indians, Washington crossing the Delaware River on Christmas Eve, and a boatload of other cool stuff that could have been mined to great effect. We had a well- documented ghostly hitchhiker on the bridge between New Hope and Lambertville which could have fit in there nicely, for example.

On the bright side, the artwork for the cover is really cool. Well done, Peter Halsey! I also like the crusty tough old men characters that impart wisdom to Bro-tagonist Andy James. Every small town has these people and they definitely are the glue that holds the world together. They also make decent straight men to the manic James. So the book is not entirely without merit, it just could’ve been so much better with a little extra work.

Recommendation? Halsey doesn’t do justice to all the legends of his chosen setting. There are also a lot of typos and at times, words that don’t make sense. Hopefully for Halsey there are a lot of Uber Bros out there who have enough cash for a 30-pack and a novella. This book was written especially for you guys! If you are not one of them, hold onto your cash and get ready for my upcoming review of Dark Cities, an urban horror anthology edited by the legendary Christopher Golden. Stay tuned!