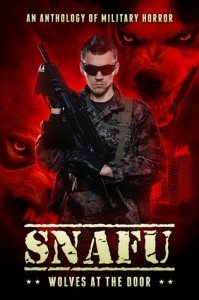 SNAFU: Wolves at the Door is the third in a series of anthologies focusing on military horror, following closely upon SNAFU: An Anthology of Military Horror and SNAFU: Heroes. A fourth volume, SNAFU II: Survival of the Fittest, is in process.

In a sense, the appearance of these stories seems inevitable: who better to combat the sudden appearance of horrors—from Lovecraftian Great Old Ones, to monstrosities created in secret Nazi labs, to alien antagonists with unspeakable powers—than the best humanity has to offer in the way of soldiers…present and past. And whether the antagonist emerges as a horrific surprise during an otherwise normal mission or is something known and prepared for, the tales in these anthologies put the best of the best to the ultimate challenge.

In SNAFU: Wolves at the Door, editors Brown and Spedding have narrowed the focus considerably, as the subtitles indicate. In each of the nine stories, humans must confront shape-shifters, were-beasts of varying types (remembering always that wer- means ‘man’). The situations range from a present-time special-forces raid on the jungle stronghold of a drug lord, secreted in the land once occupied by the ancient Olmecs, in R.P.L. Johnson’s “Taking Down the Top Cat,” to a highly evocative and deeply gruesome confrontation between an emissary of King Æthelstan and a small band of Pictish devotees of the ice giantess Skadi in Kirsten Cross’s “Skadi’s Wolves.”

The next six tales largely follow the pattern established in the first two—small group of soldiers on one side, monster(s) on the other. Steve Coate’s “Semper Gumby,” John W. Dennehy’s “Ancient Ruins,” David W. Amendola’s “The Fenrir Project,” Brian W.Taylor’s “Project Lupine,” W.D. Gagliani and David Benton’s “Werewolf!” and Jennifer R. Povey’s “Jester” each presents a variation on a theme, demonstrating how malleable the ancient figure of the shape-shifter can be, even after centuries of exploration. Each of the stories is well handled and develops its own internal energy; all are worth reading, although there might be more pleasure in approaching them one at a time rather than reading straight through in one sitting. Because of the underlying thematic and narrative similarities, and the inherent nature of the beast (so to speak), the conclusions often share a certain sameness—the human survivors hear a lonely howl in the distance, suggesting that the monster still lives; or one survivor, bitten in the fray, exchanges meaningful glances with another, knowing what must inevitably happen. Still, taken individually, the stories are powerful responses to an age-old fear.

The final entry, James A. Moore’s novella “The Wild Hunt,” is an ideal capstone for the anthology, in part because it does not follow the expected pattern. In fact, there is only a tangential connection with military types, which paradoxically makes it stronger and more effective. In separate vignettes, Moore presents five characters, including Captain Eric Fulford, each of whom participated in an annual hunt and each of whom has had his family kidnapped by unknown parties. As the story unfolds, it becomes clear that something unutterably horrible happened during that hunt and that the five men are being held responsible for the consequences, each according to his level of participation. Information emerges gradually as the story progresses, but it soon becomes apparent that in this case the lycanthropes are the victims rather than the aggressors, and the story veers from traditional lines into something intriguing—an examination of guilt and retribution, of confrontations between loyalty and the instinct to survive, between identity and reality and the tenuous line that separates them. If only for it alone, SNAFU: Wolves at the Door is a powerful and thought-provoking reading experience.