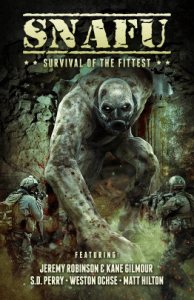 This anthology is composed of military-themed paranormal, science fiction and horror short stories. With that in mind, let’s begin.

“Badlands” by SD Perry starts us off with a story set during the Korean War. For some of us that means Hawkeye, Radar, Klinger and the rest of the 4077th MASH unit. That is not the case here. What Perry has done is take an Asian folklore story and place it into a relative contemporary setting. US soldiers fighting in Korea and now fighting some kind of jumping zombie-like creature. For me, this was an excellent story as it developed the characters and was able to place the reader right there inside the situation as it unfolded.

The second story, “Of Storms and Flame,” is set during the time of the Vikings. If you’re a fan of the series Vikings this one hits home. The little insights into language, relationships and heritage that is interspersed within this story is truly amazing. Lots of combat with melee weapons against the Lindvurm. Awesome is all I can say about this one.

The third story by Alan Baxter, “In Vaulted Halls Entombed,” is set more in present day. A small unit is tracking insurgents in the caves of Afghanistan when they encounter something they didn’t expect. This story reminded me a little of the films The Descent and Predator with its claustrophobic environment, something stalking you that you can’t see and members of your team disappearing one by one. The tension and character interaction is great. For a short story, to develop each character within a short span takes talent and Baxter shows he has that and more.

“They Own the Night” by B. Michael Radburn is set during the Vietnam War and details the actions of an armored cavalry unit. While the story was good and the plot introduced a few twists, from a technical perspective there were some issues. The premise is that the unit comprised of M113 APCs (the armored personnel carrier that predates the M2/3 Bradley) with a heavy armor element in support (that’s tanks) is to head into the jungle with some CIA spook to secure a location. The characters were richly detailed, the dialogue intense and locations vivid. But, as mentioned previously, there were some issues with the military equipment. The M113 APC has a ring mount not a turret unless it was the ACAV configuration that was introduced in 1966. During Vietnam, the soldiers learned real fast that riding inside M113’s or ‘tracks’ filled body bags as the IEDs employed by the VC and the NVA would penetrate the bottom. Therefore, it wasn’t uncommon to see a layer of sandbags on the deck (that’s the floor of the vehicle) and the soldiers riding on top. There are no windows in the M113 just vision blocks for the driver and track commander (TC) if they close their hatches. The TC actually stands on his seat to look out the vehicle and that seat is adjustable for that purpose. The M113 is made by Cadillac Gage not Cadillac Gauge. The mention of the local ‘Montenegro’ tribe I take to mean the Montagnard or Degar people. Later, there is a reference to chain mail when its actually just mail and not made from chains. Overall, the story was good but the technical issues jumped out at me. Probably wouldn’t for the average reader.

“Fallen Lion” by Jack Hanson takes a different spin. The main characters are dinosaur-like creatures that go into combat with armor and weapon systems attached to that armor. This story reminded me a lot of John Ringo’s Posleen Invasion series. However, in “Fallen Lion,” the armored and armed dinosaurs are not out to eat the humans they find. Hanson has created something here that would play well if it were made into a series. As it stands now, the work has established an interesting back story for the main characters and portrays them very similar to the warrior caste described within the Predator graphic novels.

Kirsten Cross’s “Sucker of Souls” puts the reader immediately into the story with an opening scene full of action. From that point on, it’s relentless and edge-of-your-seat. The premise is a private security company, more likely a Private Military Company (PMC), is providing security for an archeological dig. The problem with that is the excavation takes place in a castle that the former resident was Vlad the Impaler better known as Dracula. The team is trying to protect the archeologist and secure their own extraction after awakening the Prince of Darkness. Vlad, being a military strategist but from his own time, has some concept of how the soldiers will react but has never faced contemporary combat weapons and munitions. That makes for a nice inset as he attempts to adjust for large capacity magazines, communications, and C4. And cats. This was an enjoyable read with some dark humor tossed in.

“The Bohemian Grove” by Weston Ochse is set in 1970. The Bohemian Grove is surrounded by all kinds of urban legends and conspiracy theories. By inserting that location into a story, it totally adds mystique. This story follows an US Air Force special investigator as he searches for an East German STASI agent that is attempting to infiltrate The Grove. Think Project Blue Book, X-Files and Grimm and you get some idea of what this story is about. “The Bohemian Grove” is a fine addition to this anthology.

“After the Red Rain Fell” by Matt Hilton throws the reader into what appears to be a SWAT Breach, Bang, and Clear operation. What it turns out to be is a military unit entering a building using dynamic entry methods. The story moves rather quickly and the team takes losses from whatever it is inside the building. The characters have some snappy dialogue and the scenes are very detailed. But, and you had to know this was coming, there are some technical issues. The mention of a ‘cut down’ M4 threw me. The M4 is already a shortened barrel carbine cutting it down further would create the AR15 pistol version, not something anyone would want to clear a building with. There is also a mention of a 12.5″ cylinder bore barrel. I have no idea what that is and don’t even know where to start to look for something like that. The best part was the mention of the 50mm machine gun. That means a 2″ bore and that’s some serious firepower. I’m going to go out on a limb here and presume that Matt Hilton meant the .50/12.7mm machine gun, the M2, more commonly seen within the military inventory. “After the Red Rain Fell” is a fast paced, action filled story. Well worth reading.

Neil Litherland’s “The Slog” is about a location in the jungles of Vietnam that is rumored to have had strange things happen there. Most of the talk is bar room loosened tongues and campfire scary stories. But there’s always some little bit of truth in every tall tale. As the main character, Luke, finds himself alone after a VC attack, he stumbles into The Slog. From that point on, it’s a mind trip where one questions reality and fiction. Was Luke suffering from the after effects of the mortar/artillery barrage and it all took place in his mind? Or was he really experiencing all that happened as he made his way through the area known as The Slog? What really stands out is the whole ‘feel’ of that generation with the descriptive method that Litherland uses.

“Show Of Force” by Jeremy Robinson and Kane Gilmour rounds out the anthology with a Chess Team Novella. Chess Team is not a high school group that gathers after school to play the game of kings. No, this Chess Team is an elite, special operations team called in to research (and in some cases, search and destroy) strange phenomenon. Taking their call signs from chess pieces, the team inserts into the Gobi Desert to investigate a potential terrorist cell. What they find is not just a terror group but something far more deadly. The location and the environment is a little like the original The Thing: snow, ice, limited visibility and a location that will kill you if you’re not prepared. What they encounter and how they deal with it, I’ll leave out. Don’t want to toss in any spoiler. I will say that the story is taut, the action steady, the scenes well laid out. If this is just a novella about The Chess Team, I’d be very interested in reading a full length novel.

SNAFU: Survival Of the Fittest is a great anthology of military themed, historic, contemporary, and science fiction short stories. Very enjoyable and well worth reading.

Disclaimer: an unproofed copy of SNAFU: Survival of the Fittest was supplied for review.