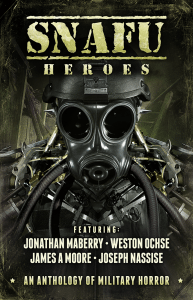 With the publication of SNAFU: An Anthology of Military Horrors, the editorial team of Geoff Brown and Amanda J. Spedding scored an undeniable win. Now, with the four novella-length tales in SNAFU: Heroes—An Anthology of Military Horrors, they demonstrate that the excellences of the earlier volume were not merely fortuitous. With contributions by Jonathan Maberry, Weston Ochse, James A. Moore, and Joseph Nassise, there is military action aplenty, enough monsters—and frightening enough monsters—to satisfy even the most discriminating of readers, and sufficient opportunities for snafus on every level, from individuals making faulty decisions to layers of bureaucratic red tape that threaten humanity’s safety.

The first story, Joseph Nassise’s “The Hungry Dark: A Templar Chronicles Mission,” takes Knight Commander William Cade and his Echo Team through a nightmarish encounter with zombies and demons in a village in Germany’s Black Forest. Darkness is a theme throughout: the darkness of night falling over the infected village, the darkness of death and betrayal as the team and a handful of survivors struggle to endure until the dawn, the darkness of a powerful storm that isolates Cade and the others from any hope of help, the darkness of demonic powers intent upon emerging into this world and controlling it. To make matters immeasurably worse, in the early stages of infection, there is no way to identify the infected from the healthy, enemies from friends. Eventually, everything relies on Cade’s intuitiveness, his courage and drive, and his willingness to sacrifice himself for all.

Weston Ochse’s tantalizingly titled “Tarzan Doesn’t Live Here Anymore” is essentially a parable about a broken world and a broken mind. It begins cataclysmically: “The earth was rent as if a leviathan had burst free to sail the galaxy for better worlds to chew.” And from there, we are introduced to an earth fissured and cracked, to innumerable monsters  of varying sorts emerging from the scars to wreak havoc on their surroundings. The Sonoran Rift, in the middle of the desert near Bisbee, Arizona, is the setting; among the battalion sent in to destroy any monsters that might rise from it is an incognito reporter, gambling his life in the hopes of garnering a once-in-a-lifetime exposé. And there are monsters—gigantic tarantulas and, more frightening perhaps, equally gigantic tarantula hawks, huge wasps that lay their eggs in the still-living bodies of tarantulas paralyzed by a venomous sting. But that is not the end of the monsters. Andy Fryerson becomes convinced that one of his fellows intends to rape an innocent woman and—just as Fryerson had tried to come to the aid of a girl he had known years before, imagining himself a wrong-righting Tarzan dropping from the trees—he now vows to stop the attack…no matter what. No one and no thing will stop him.

James A. Moore’s “War Stories” represents in some ways a retreat from the expansiveness of the first two. It begins quietly, intimately, with two characters: a young man fresh from appalling experiences in Viet Nam (and equally appalling ones upon returning to the States); and his grandfather, a veteran of both World War II and Korea. Realizing that his grandson is on the brink of a breakdown, the old man sits with him on the family porch and, for the first time, opens up about his wartime experiences and inviting his grandson to reciprocate. Moore skims through this part, as the two establish a powerful bond…powerful enough for the grandfather to relate one final encounter, with Nazis, death-camp victims used for experimentation, unbelievable monsters created from humans, and one anomalous individual who might or might not have been human, or a monster. The story accentuates the inhumanity of war by expanding its characters—literally and physically—as the grandfather and a few others fight against seven-foot-tall monstrosities and the human-monsters that created them.

The final story is Jonathan Maberry’s “Changeling: A Joe Ledger Adventure.” It begins shortly after Ledger has witnessed the death of the second woman he had ever loved, Grace Courtland, and his subsequent descent into a distanced coldness, a ruthlessness that he himself describes as monstrous. Now he is summoned from the prospect of enjoying a baseball double-header on a perfect May afternoon to investigate a supposedly empty scientific laboratory. The place had recently been raided by multiple alphabet-agencies, none of which fully trust the others. Ledger’s enigmatic boss, Mr. Church, is convinced that there is more inside than simply empty rooms, particularly since a dozen or so of the scientists who should have been inside have never been found. Angry at the interruption in his life and at the multiple administrative snafus that prevent anyone from going in, Ledger enters the building. There he discovers—no great surprise, of course—monsters beyond his imagining. But more importantly, he discovers another person already inside, already searching for answers, already more knowledgeable about the lab that anyone should be…or could be. And worse, she triggers excruciating memories of Courtland.

Each of the stories is well handled, deftly written, approaching questions of what constitutes a monster and what constitutes a hero from vastly different directions. Each answers some of those questions; each leaves others frustratingly unanswered. But in the ambiguities inherent in each story, in the unresolved possibilities of the natural and the supernatural, lie the strengths that makes each powerful.

SNAFU: Heroes is the first in several advertised follow-up anthologies to the original SNAFU, that will include SNAFU: Wolves at the Door and SNAFU II: Survival of the Fittest. From the evidence in the first two volumes, these are books to watch out for, the purchase, and to enjoy thoroughly.